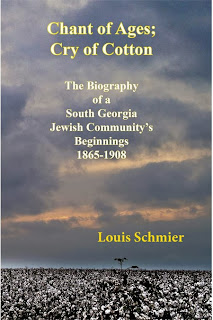 To show how far Louis Schmier has come, his newly-published history of Valdosta’s Jewish community, “Chant of Ages: Cry of Cotton” opens with an anecdote about him encountering travelers from Michigan who are flabbergasted that there are Jews in south Georgia… “down here, among them, alone.”

He toys with the visitors, giving them fanciful details about the exotic Southern Jew, but he can identify with the attitude — it was one he held when he left New York in 1963 to pursue a Ph.D. as quickly as possible in the hostile territory of North Carolina.

So fearful was he that when he crossed the state line into Virginia, he locked his car door.

Through a series of circumstances — mostly a lousy job market in academia — he then found himself in Valdosta for as temporary a time as possible, because he had vowed never to set foot into Georgia (or Alabama, Mississippi and South Carolina). Yet he wound up staying, and the story of his conversion from reluctant Yankee outsider to a Southern Jewish history enthusiast frames the book.

He was volunteered to give a talk about the history of Valdosta’s Jewish community in 1976, knowing nothing about the subject and still considering himself an outsider. He was going to rely on a history that had been written years before, stating that there were unconfirmable rumors of Jews there before 1900, but the community really started around then, and the Valdosta Hebrew Congregation began in 1908.

After a cursory glance at the material, he was set. But his wife prodded him to dig a little, which he reluctantly did. Until he found original documentation about Jews in Valdosta in 1868 — the Ehrlich and Kaul families. He was hooked, and became a passionate advocate of Southern Jewish history, which had been mostly looked down upon as irrelevant or a pointless sideshow to the real action in places like New York.

The book is written as a merger of “the formal historian with the folklorist,” to weave a narrative about the lives of Valdosta’s first Jews.

The history begins with the reestablishment of the railroad in May 1866, connecting Valdosta with the outside world. Soon, Abraham Ehrlich and Benjamin Kaul decided to leave Savannah and set up a branch of their family’s store in south Georgia. Thomasville was the first destination, but Abraham’s uncle told him of anti-Semitism in Thomasville at the beginning of the war — and that not only was he treated well in Valdosta, he was one of many who sent family members to take refuge there during the shelling of Savannah.

In Valdosta, the arrival of Jews was seen as a positive sign for the town’s long-term viability. And the story unfolds from there.

Since 1967, Schmier has taught at Valdosta State as a professor of history.

The book is available through his website, and a Kindle edition is now available on amazon.com.