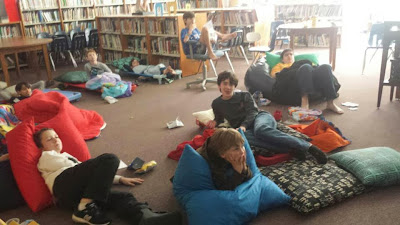 Above: Students, parents and faculty have a sudden sleepover at Birmingham’s N.E. Miles Jewish Day School.

The sudden snowstorm that hit central Alabama on Tuesday morning caught everyone by surprise, and the Jewish community was no different, with some synagogues, Chabad, the N.E. Miles Jewish Day School and the Levite Jewish Community Center turning into impromptu overnight shelters for stranded students and members.

The storm was expected to be most intense in the southern part of the state, with only a dusting in the Birmingham area and no travel problems anticipated because very little moisture was expected to make its way that far north. But the storm’s boundary shifted north by about 150 miles, dumping over two inches around Birmingham and catching everyone by surprise. A rare frozen mix also hit areas from Baton Rouge to New Orleans, the Mississippi coast, Mobile and Pensacola.

The flurries started at 9:15 a.m., and within an hour had picked up to the point that road conditions in the mountainous city were already starting to deteriorate.

At 10:30 a.m., the Day School was among those announcing an early closure, and the race to pick up students and get home was on. But by then, especially in Mountain Brook, many roads were jammed and motorists were spinning out or going into ditches. Overton Road, the main road through an area where much of the Jewish community is located, was a jammed bumper-cars course.

By 1:30 p.m., weather forecasters urged people to stop trying to get home and start figuring out where to spend the night, as area hotels quickly filled.

For 16 students and nine adults, that somewhere wound up being the Day School. At 10 p.m., Ruth Nomberg reported that at the LJCC, all was well — “everyone fed, watched a movie and lights out for most.” About 60 stayed at the LJCC.

Many secular schools were also filled with students whose parents could not make it to the schools. Julie Altmark reported that many of her students at Shades Mountain were there for the night — along with students from other Hoover elementary schools who were able to be brought by bus.

Several employees and visitors at Birmingham’s Temple Beth-El were spending the night. Caterer Roz Bloomston was one of those staying there, and wound up preparing meals for the group. Though minyan was officially cancelled, they had enough overnighters to have an evening service.

Temple Emanu-El, which has a preschool, also had a group spending the night. Three students were among those staying overnight, two others left with a parent in the late afternoon to walk to a friend’s house. They planned to have members with four-wheel-drive vehicles help get everyone home.

Gerry Nemet said he wound up trying to sleep on the floor of Cracker Barrel in Calera. Videographer Allen Rosen of Tuscaloosa was sleeping on a sound blanket on the floor of the emergency room at Callahan Hospital, and said “at least we were not stuck on the highways.” Others with downtown offices wound up staying at work and making do.

Many did get stuck on the closed-down highways. For some in the community, getting home was a day-long ordeal. Rabbi Eytan Yammer of Knesseth Israel left for the Day School at 10:30 a.m. and got home well after 7 p.m. During the long trek, he and the Duvdevani brothers pushed several cars up a hill and rode in the back of a pickup truck to give it more traction. Knesseth Israel had pizza and a movie mid-day on Wednesday for those in the area who were able to walk there.

Teacher Julie Tuck reported a 12-hour trek to make it home. Many wound up getting part-way home and abandoning their cars, either walking home, finding a quickly-opened warming station or shelter with friends — or even complete strangers.

Outside Bais Ariel Chabad Center on the snarled ice-rink of Overton Road, the Chabad rabbis helped direct traffic where possible and stayed with an elderly man who was having a seizure. They directed those who were stuck to park and come to the Chabad Center for coffee and warmth. “Blankets were given to newborns, inflatables were blown up for stranded and bored children, pizza and fries was served to hungry familes, and Chabad staff helped people figure out how to get home safely,” said Rabbi Yossi Friedman.

The Chai Tots pre-school at Chabad hosted 16 students and some stranded parents overnight, with parents preparing dinner and families walking to the Posner, Friedman and Weinbaum homes. Many were able to be taken home by volunteers with four-wheel-drives, but some remained at Chabad for a second evening.

Chabad also assisted some Israeli travelers who were stranded at the Birmingham airport.

Rabbi Ariel Asa of Atlanta left his home on Tuesday morning to officiate at a bris in Birmingham in the early afternoon. He made it as far as Pell City, where he spent the night with about 200 others at a Christian academy by the Interstate. “They were very gracious to everyone and tried to help everyone that they could.”

At the academy, he met someone who was a member of Birmingham’s Beth-El, where the bris had been scheduled — and whose mother was one of those forced to stay overnight at Beth-El. They made their way to Birmingham together in a front-wheel-drive, and the bris was celebrated a day late at the family’s home. Asa stayed with the family Wednesday night, making it back to Atlanta on Thursday afternoon. He said he was “grateful to be in one piece and home safely.”

With single-digit overnight temperatures and a high not expected to hit above freezing in Birmingham on Wednesday, many had to remain in place until Thursday. Cathy Fingerman left Beth-El mid-afternoon on Wednesday but had to turn back because of road conditions, spending another night at Beth-El.

Area congregations, Chai Tots and the Day School were still closed for Thursday. The LJCC said it was staying closed on Thursday to prepare its facility after being a shelter during the previous 48 hours.

The Day School announced mid-Thursday that it would be closed on Friday and have an e-day for students, as they hoped all families would be reunited by Thursday evening. Other schools followed suit, closing for Friday.