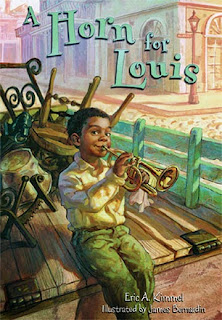 Eric Kimmel has written dozens of books for children, but one in particular is about a New Orleans mitzvah that the world still benefits from a century later.

“A Horn for Louis” is based on the real-life interaction between jazz legend Louis Armstrong and a Jewish immigrant family in New Orleans, the Karnofskys, when Armstrong was a child. The mitzvah detailed in the book helped set him on his musical path as one of the most influential figures in jazz and one of the first African-American entertainers to find a wider audience in American society.

Kimmel, who has over 50 books to his credit, will speak in New Orleans on Nov. 23 as part of Jewish Cultural Arts Month. His visit is co-sponsored by the Jewish Community Day School, PJ Library and Vicky Karno.

Kimmel will discuss “A Horn for Louis” with religious school and Day School students at Temple Sinai in New Orleans at 9:30 a.m. At 2 p.m. there will be a story hour and book signing at Octavia Books, where he will share some of his favorite stories.

Armstrong grew up in “the Battlefield,” part of the Storyville district that was notorious for prostitution. His father abandoned the family when he was an infant.

As a child, Armstrong made money by hauling coal to Storyville, and he also did odd jobs for the Karnofskys, who took him under their wing. Armstrong later wrote about his discovery that the Karnofskys were also subjected to discrimination by “other white folks’ nationalities who felt that they were better than the Jewish race.” Even at that young age “I could easily see the ungodly treatment that the White Folks were handing the poor Jewish family whom I worked for.”

Armstrong was captivated by music and listened to bands and performers in Storyville, especially Joe Oliver, who later became a mentor to him.

While working with the Karnofskys, he would pass a pawn shop each day, and he noticed an old cornet in the window. He longed to play a cornet but could not afford one.

The Karnofskys purchased the cornet, but Armstrong was not one to accept charity. They made an arrangement where $2 in salary was advanced to him to purchase the cornet, and then 50 cents a week was set aside until the $5 cost had been met.

In Kimmel’s novel, the transaction is written as a surprise for Chanukah, which Armstrong feels embarrassed about accepting as a gift.

In the book, Karnofsky explained to Armstrong how he had been the recipient of help, and now could help someone else. Kimmel notes that his account is based on the true story, and should not be taken as historically accurate.

Nevertheless, Armstrong later cited the “real life and determination” that he saw in the Karnofskys, which led him to wear a Star of David pendant throughout his life, and he also often had traditional Jewish foods in his home, having developed an affinity during his time with the Karnofskys.

Today, there is a Karnofsky Project in New Orleans that seeks to collect used band instruments and other donations to equip children who could not otherwise afford to buy a band instrument. The project also assists with music lessons.

Though “A Horn for Louis” was first published in 2006, it became a PJ Library selection in 2012. Several of Kimmel’s books have been distributed by PJ Library.

Kimmel has won numerous prestigious awards, including the Caldecott Honor Medal for “Hershel and the Hanukkah Goblins,” and the Sydney Taylor Picture Book Award for “The Chanukkah Guest” and for “Gershon’s Monster.” He is the only author to win the National Jewish Book Award for picture books twice, winning for “The Chanukkah Guest” and for “The Mysterious Guests.”