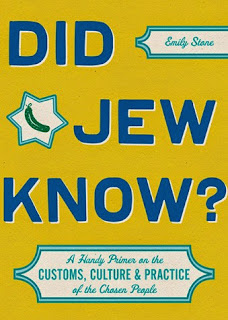 Did you know that New Orleans native Emily Stone wrote a book entitled “Did Jew Know?”

The “handy primer on the customs, culture and practice of the Chosen People” is a witty presentation of the breadth of the Jewish experience, “from Saul to Seinfeld.”

Part of a family rooted in Louisiana, Stone moved to New York as a child. Her father, Harvey Stone, got a job as a U.S. Attorney in the 1970s and moved the family to Brooklyn, which “was not even starting to gentrify at that time,” she said.

Growing up, Stone visited New Orleans two or three times a year, and sometimes would also visit Bogalusa. “The Jews who grew up in Uptown and went to Newman… that is the New Orleans I know,” she said.

She also went to “the seven restaurants my grandparents went to,” and assumed that like New York, everyone was Jewish in New Orleans because “that’s who was at Chris’ on Sunday night or Galatoire’s for lunch on Saturday… when my mother told me New Orleans is only 3 percent Jewish, I said we must know the entire 3 percent.”

Of course, her experiences in both worlds drove home the notion that “the New York Jew is so different from the Southern Jew.”

“Did Jew Know” has been described as irreverent but “deceptively comprehensive.” Stone has said the Judaism is still mysterious and foreign to many people, including Jews.

Aside from being a writer, she has taught yoga for 12 years and became the head writer and co-creator of The Yogapedia Project, an interactive series of ebooks for yoga teachers and dedicated yogis.

She noted that Bhakti yoga is a devotional practice that “includes chanting to Hindu gods, which isn’t exactly the way to go in Judaism.”

There are a lot of Bu-Jews, Jews who follow Buddhist teachings, and she has been referred to as a Hin-Jew.

Recently, though, her brother has become more observant Jewishly. She has followed suit, and “become more uncomfortable with the Bhakti practice of yoga… it’s been an interesting journey.”

She added, “I’m returning now to Jew. The Hin part is fading.”

She thinks her next writing will be about returning to faith, about keeping Shabbat and what it entails, and talking with others who are traveling that path.