Rubin’s “The Cottoncrest Curse” a question of heritage 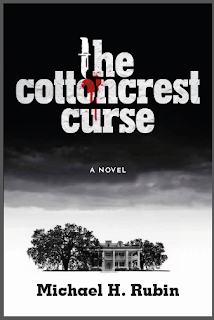 What do we truly know about our ancestors, and if we knew more, would that alter our perceptions of them — and of us?

That is one of the questions Baton Rouge attorney Michael Rubin explores in his debut novel, “The Cottoncrest Curse,” which came out in September.

At the center of the novel is Jake Gold, “a Russian Jewish immigrant who must conceal his identity in the Deep South” while working as a peddler in the 1890s. Gold was modeled after Rubin’s great-grandfather, Bernard Ginsberg, who was sent alone across Russia by his parents at age 12 so he could immigrate to the United States and wind up in Louisiana.

The book opens with the 1893 murder of Rebecca Chastaine by her husband, Colonel Judge Augustine Chastaine, owner of the Cottoncrest plantation, who then killed himself. Chastaine’s father had also committed suicide there at the end of the Civil War, leading to a reputation that the place was cursed.

Sheriff Raifer Jackson suspects it wasn’t a murder-suicide and Gold was guilty of murdering the Chastaines, leading Gold to go on the run from both the law and the racist Knights of the White Camellia.

The book takes place in three eras — the 1890s, the Civil Rights era of the 1960s and the present, Rubin noted. “The key murders that kick off the story take place in the 1890s but they resonate to the present.”

The book started taking shape during the 4:30 a.m. walk Rubin takes every morning with his wife, Ayan. They would talk about plots and characters, discussing how to address issues of race, religion, identity and culture in the South in the context of a thriller.

During one of those walks, she came up with the title — cotton for the plantation setting, and crest for both a pinnacle and the crest of an aristocratic family.

“One of my concerns is how do you take concepts and make them accessible to the broadest audience? Legal books don’t do that,” he said.
Rubin noted that “we have these smidgeons of information about our great-grandparents and our great-great-grandparents, and we’re not sure if they are accurate or inflated, or simply fictionalized.” He asked, “If we knew more about our actual history would we change our perception of who we are?”

The story details the compromises and sacrifices Gold had to make to survive in a “harsh and unyielding world,” describing the Jewish immigrant experience.

Though the book’s origin is in weighty questions, Rubin said it’s not a heavy philosophical treatise — it’s a thriller. “At the heart is the story of Jewish identity and survival.”

He has already done book presentations to the Jewish communities of Monroe and Alexandria, where his great-grandfather landed and was active in the early days of one of the local congregations.

He will speak at B’nai Zion in Shreveport on March 9 at 7 p.m., followed by a reception and book signing.

In his talks to Jewish audiences, he gives a quick overview of the relationship between blacks and Jews in the South, from colonial days to the present.

In 1724, France applied the Code Noir to Louisiana. Most of the document codified the regulations for slavery of blacks in the colony, but the first article decreed the expulsion of all Jews. “Louisiana’s history and the history of the whole Louisiana Purchase has been one of race and religion since its inception,” Rubin said.

He researched the era extensively, reading fiction and non-fiction works from the time to ensure that he got the language of the time correct. Because it was published by LSU Press, they had the book vetted by faculty historians before publication.

Rubin grew up in Baton Rouge, and his father, Alvin Rubin, was a Federal judge in New Orleans who “ordered the desegregation of a number of schools, and the reaction was so vehement that we had Federal marshals living in the house for months at a time,” he said.

He studied music at an early age, gravitating to jazz at age 12. He started playing professionally in the French Quarter at 16 and had a jazz band while in college — with Natalie Cole as the opening act.

Often, when he gives presentations about his book, he ends at the keyboard with an original composition. “I still play every day,” he said.

He also has been a radio and television announcer, and has been an attorney in Baton Rouge since 1975. He has also been an adjunct professor at LSU, Tulane and Southern, and lectures nationwide on ethics.

Selected as one of the Jewish Book Council’s 2014-2015 authors, Rubin has a second book already completed — a contemporary novel about environmental racism and the question of where polluting industrial plants are located — and a third book is already in the works.