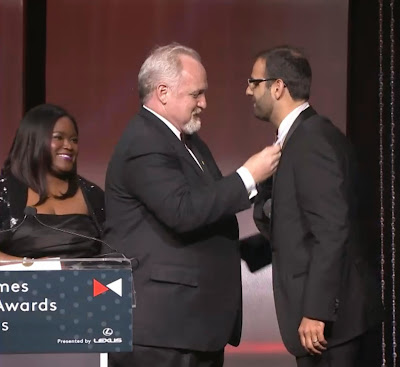 When a culinary tour of Israel for this summer was announced recently, New Orleans Chef Alon Shaya said it would be a chance for people to tour Israel with James Beard Award winners — then quickly noted it was the other three chefs on the tour who are the James Beard winners.

Make it four for four.

Shaya opened his self-named Israeli restaurant, Shaya, in New Orleans earlier this year after being executive chef and co-owner at Domenica and Pizza Domenica. In 2012 he was named Chef of the Year by New Orleans magazine.

At the award ceremony, Shaya said he was “totally not prepared to make a speech.” He thanked New Orleans for embracing him. “I’m an Israeli who grew up in Philly who is cooking food in New Orleans, and somehow that all comes together and tastes good.”

He noted that no chef gets to that level without a lot of assistance, and he thanked “the team we have at Domenica, Pizza Domenica and Shaya,” the “300 employees that make those restaurants tick every day… none of this could ever happen without all the hard work, dedication and passion.”

He also thanked his wife, Emily, for her support, and John Besh and Octavio Mantilla who “have been huge parts of my career and my growth.”

After his name was announced and Shaya made his way to the stage, the announcer suggested “don’t get between this chef and his extra-virgin olive oil.”