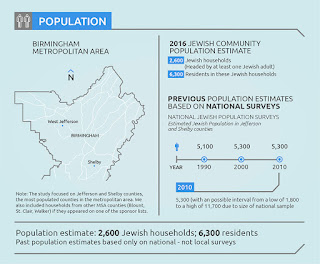 After a couple decades of figuring that Birmingham’s Jewish community numbered around 5,300, a newly-released study estimates the area’s Jewish population at 6,300, with 2,600 Jewish households.

A Jewish household was defined as any household where at least one adult identifies as Jewish.

In 2014, Birmingham’s Jewish agencies and congregations started the process that led to the study, developing a combined file of household information from all organizations, and the survey itself.

The file was completed in October 2015, and the survey took place in November and December 2015. Results were released to the public in late June.

Aside from the population figure, the study came up with numerous surprises. While it is often assumed that a large proportion of people in the Birmingham Jewish community are natives, the study found that only 21 percent of the households are headed by a lifelong Birmingham resident, and another 18 percent are from other parts of the state.

There were three clear divisions in responses by age, but in most cases it was the oldest and youngest respondents — ages 50 and above, and ages 20 to 39 — that demonstrated the highest levels of Jewish involvement, with lower levels among ages 40 to 49.

In households with children, 79 percent are being raised Jewish and 10 percent are raised part-Jewish and part-other. Eighty-six percent receive some formal Jewish education, though just 16 percent are in the Jewish Day School.

It is estimated that 74 percent of Birmingham Jewish households have a synagogue or temple membership, with 40 percent attending services at least once a month.

The study showed that 90 percent of the community can be found in 14 zip codes, almost entirely Over the Mountain. Over half continue to reside in three zip codes that have been home to the bulk of the community for decades — the Mountain Brook zip codes of 35223 and 35213, labeled “Birmingham’s Jewish Legacy” in the study, and 35243.

The next highest figure is further out Highway 280, in zip code 35242, “Transplants with Jewish Heritage.” That is followed by areas of Birmingham’s Southside, “Young Jewish Adults,” and Irondale and Homewood. The Vestavia and Hoover areas are listed as “Next Generation Jewish Families,” including the 35243 zip code that includes parts of Mountain Brook and Vestavia.

Ninety-six percent said they are proud to be Jewish, and 88 percent have a strong sense of belonging to the Jewish people. Affiliation with Jewish organizations and having Jewish friends were important to 78 percent, but just 24 percent say it is important to live in a Jewish neighborhood, and 17 percent keep some level of kashrut in their homes.

Attachment to Israel is high in Birmingham, with 85 percent saying they are very or somewhat emotionally attached to Israel. Two-thirds of Birmingham Jews have been to Israel or were born there, with 8 percent having visited more than 10 times.

Compared to the 2013 Pew Study of Jewish Americans, Birmingham Jews are more likely to identify being Jewish by religion, “consistent with higher levels of religious identity in the South,” much more likely to have a graduate-level degree, live in the suburbs and have an attachment to Israel.

Birmingham Jews are less intermarried than the national average — 34 percent, versus 44 percent nationally, but slightly less likely to be raising children as Jewish.

Freeform responses included frustration by newcomers on an inability to penetrate what is seen as a tight-knit, “cliquish” community, and a perception of preference given to heavy-hitters in the community.

Competition among institutions for scarce resources, “turf wars” and questions of institutional ability to adapt to rapid change in the Jewish world also were raised. Collaborative Jewish learning opportunities were urged.

The entire study can be viewed online here.