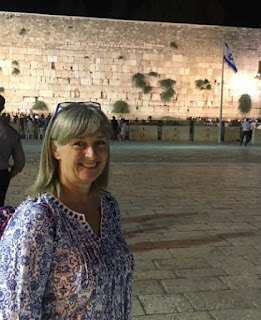 A Catholic school educator from Lake Charles joined colleagues from across the country for an educational expedition to Israel in July. Middle and high school educators from 12 states participated in the Anti-Defamation League’s nationally acclaimed Bearing Witness Advanced program, which aims to provide an advance course of study on anti-Semitism, the Holocaust and Catholic-Jewish relations.

The participants toured the country, visited Jewish and Christian holy sites, heard firsthand accounts and information from Arab-Israelis, Israeli journalists, Jewish community leaders, a survivor of a suicide bomb bus attack, residents of kibbutz on the Gaza border, interfaith experts and scholars including representatives of the Israeli government, The Jerusalem Center for Jewish-Christian Relations, the Aramaic Christian Association, and the Interfaith Association.

Diane Oden, who teaches at Our Lady Queen of Heaven School in Lake Charles, represented ADL’s South Central region. She said the trip was “the best learning opportunity of my life… The wide variety of speakers, the places we visited in every part of Israel, the rich culture is a gift I treasure and will share with my students.”

Her most memorable experience was meeting and listening to Holocaust survivor Hannah Pick while visiting Yad Vashem. Pick spoke of her childhood friendship with Anne Frank from Kindergarten to sixth grade, and their experiences as they both wound up at Bergen-Belsen.

Since its inception in 1996, ADL Bearing Witness: Anti-Semitism, the Holocaust and Contemporary Issues has trained more than 2,000 Catholic school educators across the U.S. about the historical relationship between the Jewish and Catholic communities and the impact of that relationship on Catholic teaching, catechesis and liturgy.

In 2005, the ADL initiated Bearing Witness Advanced — endorsed by the National Catholic Educational Association and the U.S. Conference of Catholic Bishops — to allow Bearing Witness graduates to extend their learning and travel to Israel.

“This is a truly once-in-a-lifetime experience for Catholic educators to directly experience the breadth and diversity of today’s Israel,” said Lindsay Baach Friedmann, ADL South Central Director of Education. “Our goal is that these remarkable Catholic teachers will take their memorable experiences on the ground in Israel back into their classrooms, ultimately having a positive impact on their students. The Catholic and Jewish communities have reached an important crossroad, with Pope Francis elevating and placing a significant emphasis on relations between our two communities. Such a mission is extremely timely.”