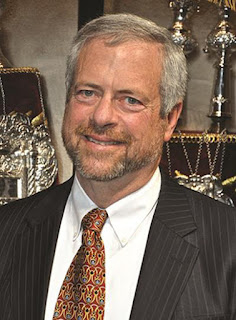 Birmingham’s Temple Emanu-El, the largest Jewish congregation in Alabama, announced the upcoming retirement of Rabbi Jonathan Miller, who has led the congregation for 26 years.

In a letter to the congregation, Emanu-El President Ben Weil said “after almost three decades of tireless devotion to our Temple and unwavering commitment to the greater Birmingham community, Rabbi Miller will transition from his role as Senior Rabbi to the role of Rabbi Emeritus,” effective at the end of June.

“We look forward to celebrating an enviable rabbinic career that has allowed for our congregation to flourish and grow and has had such a direct impact on so many of the successes that our Temple family currently enjoys,” Weil said.

Miller wrote a message of “gratitude and satisfaction” to the congregation, saying he has “come to a place in my life where I have decided to retire” and is “eager for a new chapter in my life, away from the daily and awesome responsibilities of being a congregational rabbi.”

He said the decision was “totally mine” and that he has loved his work and the congregation. “I am most fortunate among men,” he wrote.

Miller’s current contract runs through 2019, and Weil said “no individual in Temple leadership desires for Rabbi Miller to retire prior to his contract termination,” but Miller and his wife, Judi, approached Temple leadership in August about retiring early.

In October, Miller gave congregants at Yom Kippur services a copy of a book he had just published, “Legacy: A Rabbi and A Community Remember Their Loved Ones,” a collection of eulogies he has given over the past 26 years.

Miller is currently the second-longest serving rabbi in Alabama at the same pulpit, behind Rabbi Steven Silberman of Ahavas Chesed in Mobile.

Historically, Emanu-El has not had much rabbinic turnover. Rabbi Mayer Newfield served the congregation from 1895 until his death in 1940, and was succeeded by Rabbi Milton Grafman, who arrived on the day Pearl Harbor was attacked in 1941 and retired in 1975. Grafman remained in the community and was rabbi emeritus when Miller arrived.

Ordained in 1982, Miller came to Birmingham from the Stephen S. Wise Temple in Los Angeles. He also had served at Temple Shalom in Auckland, New Zealand.

Weil said the Emanu-El leadership anticipates hiring an interim rabbi for next year, in preparation for a rabbinic search in early 2018. Such rabbis have “extensive and specific” experience in helping congregations during such transitions. Weil said “it is our belief that Rabbi Miller’s retirement will serve as an opportunity for our Temple to reflect and introspect on our current state and our future direction.”