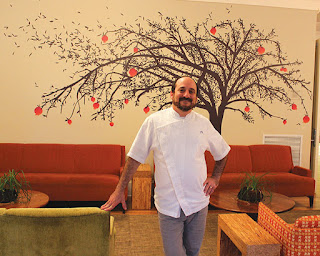 Next month, New Orleans will welcome an addition to the kosher restaurant scene, with a “kosher farm to table” concept by Chef Daniel Esses of Three Muses.

Rimon will open at the Tulane University Hillel, open to students and the general public. Esses plans to be open for lunch in early August, then full time when the students return. The goal is to be open year-round and be available to cater events in the community.

He said Rimon would be the same concept as his non-kosher restaurants, “but doing it kosher,” farm-to-table, homemade and locally sourced as much as possible.

Being kosher forces him to do a lot of the products in-house, such as breads, condiments, pickles. Being on campus means he has to make it reasonable, “kosher farm to table at an affordable rate.”

Before the semester ended, he met with groups of students and was told that speed is very important. Rimon will have a lot of grab-and-go, with staple items such as sandwiches and salads. “This way, you don’t have to wait in line, you can grab it and head to class.” This will also benefit workers at businesses in the area.

The menu is still being developed and will change frequently. “You’ll see things come in and out,” he said.

He is also planning an Israeli salad bar and “build your own plate” options.

There is a lamb meatball “I’ve been doing for years” that he will bring to Rimon, without the cheese, but with a tomato chutney. He also has a matzah ball soup “that will cure any sickness.”

“I didn’t grow up here so I can’t tap into my boudin culture,” but in the last few years he has been at the Bourbon, Boudin and Beer event, doing a riff on Jewdin, using corned beef, chicken liver, rye bread and matzah balls instead of the pork and rice base. Some years he has fried it into Jewdin balls.

There will also be homemade pastas, as he has run Esses Pasta since 2009.

In October 2015, Esses was brought on board at the Jack & Jake’s Public Market, which was rebranded the Dryades Public Market. During that time, he said, Kevin Wilkins was mentoring him. Wilkins was also president of Tulane Hillel’s board, and when the Hillel’s Kitchen space was becoming available earlier this year, he spoke with Esses about his future plans.

He added, “I was kosher for a long time, so I’m coming full circle.”

Schiller said “There’s a beautiful alignment between his vision for food and our vision for Hillel.”

Esses said as a child, he helped his mother in the kitchen for the holidays, making chopped liver, matzah ball soup. She would tell him stories about his grandmother, who made everything from scratch with local produce in the Bronx. He recalled “blackberry bushes everywhere.”

In college, he “wasn’t living a healthy life” and decided to change, starting with making each meal himself, “eating healthy, being vegetarian.” He thought about becoming a nutritionist, since his father is a doctor, “but I wasn’t into the sciences, so that wasn’t going to happen.”

He has both Sephardic and Ashkenazic heritage, “the best of both worlds.” His father is from Aleppo, and Esses said “Jews from Aleppo are amazing cooks” because Aleppo “was an amazing food city” with a wide range of spices and influences.

He moved to Arizona and started cooking at a health spa, then at a vegetarian restaurant in Seattle. Cooking in France was “fun and challenging.”

After working at Buddakan NYC in New York, he came to New Orleans, starting at Peristyle and then working at Restaurant August. He was sous-chef at Café Degas, opening chef at The Bank Café and executive chef of the Marigny Brasserie.

In 2010 he was part of a trio to open Three Muses, where he was executive chef. In 2016 they opened a second location on Maple Street, but closed it on May 31.

Esses is impressed by the Tulane Hillel facility. “It’s unique how nice this Hillel House is and how much they care.”

He and Schiller chose the name Rimon because of its symbolism in Judaism. The pomegranate is seen as symbolic of knowledge, and the Hillel has a pomegranate tree by the front entrance. There is also a tradition that pomegranates have 613 seeds, symbolic of the 613 commandments in the Torah.

Esses said they did not want to have a name that was specific to New Orleans or to him. “I wanted something that could be universal to all Hillels around the country” if they decide to try and replicate this elsewhere. “Other universities see this as a very successful Hillel and want to emulate it.”