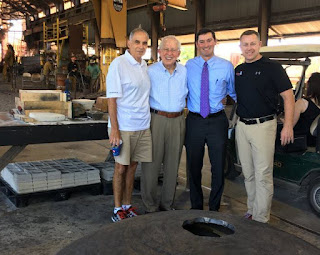 Bruce Sokol, Mike Slive, Layne Held and Spencer Lynch at the pouring of the Maccabi cauldron, at Sloss Furnace in Birmingham.

The two volunteer co-chairs for the JCC Maccabi Games in Birmingham come at the event from very different perspectives.

Layne Held, First Vice President at ServisFirst Bank, said the Maccabi Games are very important to him. “I’ve been fortunate to be both a player and coach” in the games, playing twice, in Memphis and Atlanta. “I still have good friends from those games,” including coaches for this year’s Atlanta team, he said.

After coaching the 2011 Birmingham delegation in Israel, he wanted to see Birmingham host the games, and started talking with Dan Tourtellotte about the possibility. Tourtellotte, director of operations and development at the Levite Jewish Community Center, is now supervisor for the 2017 Games.

When the LJCC was looking for an executive director in 2012, Held said the only thing he noticed on Betzy Lynch’s resume was that she had run the games before, “and she immediately received my vote.”

Lynch ran the 2012 Games in Memphis, the Maccabi 30th anniversary, and felt Birmingham had the potential to host. After she was hired, Held told her that when she thought Birmingham was ready to take the plunge, to call him.

Lynch “knew we needed to challenge ourselves,” Held said. “She knew we could do it.”

Co-chair Bruce Sokol didn’t have that Maccabi background, as the games did not exist when he was growing up. “There was no such thing as Maccabi, or I would have loved to be involved.”

When the opportunity came to co-chair, he knew it would be a daunting task, but “I have a deep-seeded, long-time love for the JCC… when I heard about the Maccabi Games coming to Birmingham, I felt that it would be beneficial to the greater Birmingham community and especially the Jewish community,” he said.

Sokol says this is probably the biggest event in the history of Birmingham’s Jewish community, and an opportunity to shine on a national level.

Held said he has been part of the Maccabi movement for 15 years ago. “Once you participate, it is ingrained in you.”

Honorary co-chairs for the Maccabi Games are Mike Slive and General Charles Krulak, and like the volunteer chairs, their backgrounds are quite different. Both will address the athletes at the opening ceremony.

In 2002, he moved a few blocks to become the commissioner of the Southeastern Conference, a post he held until 2015. After retiring, he has stayed in Birmingham.

In 2006 and 2007 Slive headed the Bowl Championship Series, then was instrumental in creating the college football playoff, Dr. Pepper pitchman Larry Culpepper notwithstanding.

During his time in the SEC, the conference won an unprecedented seven straight football national championships, launched the SEC Network and was active behind the scenes to facilitate the hiring the first minority football coach in conference history.

When he retired in 2015, he was seen by many as the most powerful man in college football.

Krulak has spent his life with a very different kind of power, rising through the military ranks to become the 31st Commandant of the U.S. Marine Corps, and a member of the Joint Chiefs of Staff under President Bill Clinton.

After retiring from the military, he became chief administrative officer of MBNA America, then chief executive officer of MBNA in Europe. In 2011, he moved to Birmingham to become president of Birmingham-Southern College, which had been reeling from financial problems. He and his wife, Zandi, moved into a dorm and spent a lot of time with the students, becoming known for carting treats through the library late at night during exam times.

After righting the ship at Birmingham-Southern, he retired in 2015.

Krulak has a “major volunteer role” with the Birmingham Jewish Federation, though he is not Jewish. He often speaks out on behalf of Israel, referencing his days in the military.

Krulak assisted legendary Israeli General Moshe Dayan on a 1966 visit to Vietnam, where Krulak was commanding general of the Pacific Fleet Marine Force. Dayan tagged along with Krulak’s company for several days. The next year, Dayan would go on to lead Israel to the stunning Six Day War victory.

Krulak said he is honored to be part of the games. “The JCC Maccabi Games are a huge plus for Birmingham in general and the Jewish community in particular,” he said. “The gathering of these young athletes and their parents will add to the spirit of inclusiveness that our City is famous for embracing.”

For Slive, being part of the Maccabi Games “brings together two very important parts of my life — Judaism and athletic competition.

Slive said the athletes will “experience the thrill of competition and create memories that will last a lifetime.”

Krulak said he views the games as having “great value in bringing together young men and women in a spirit of sportsmanship and camaraderie.”