Maccabi in Birmingham: “As good a Games as you get” 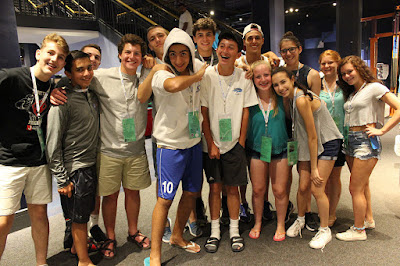 Above: Athletes enjoy the Block Party at the McWane Center on Aug. 2.

As the sun began to set on Aug. 3, Layne Held, co-chair of the JCC Maccabi Games in Birmingham, stood on the outdoor track at the Levite Jewish Community Center, holding a water bottle and watching hundreds of athletes enjoying dinner and the closing ceremonies of the 2017 Games.

Taking it all in, he finally said “look around. This is what it is all about… I’m kind of speechless.”

And why not? Birmingham had just pulled off a successful Maccabi Games, the second-smallest Jewish community to ever attempt it.

According to many long-time Maccabi coaches and delegation heads, “successful” barely begins to describe the week.

About 900 athletes from across the United States, Israel and Ukraine attended the games, which began with an opening ceremony on July 30 at Bartow Arena. Competitions in 10 sports took place from July 31 to Aug. 3 at venues across the city.

Robert Kiewe, who has overseen two Maccabi Games at the Katz JCC in Cherry Hill, N.J. and has “been to more than my share of games,” said “they launched this out of the ballpark.”

“This is as good a games as you get,” said Alan Goldberg, senior vice president of operations for the Jewish Community Centers Association, which coordinates the JCC Maccabi Games nationally. “These are among the best games I’ve seen, and I’ve been around,” he added.

Steven Weisbrot from JCC On the Hudson in New York, who said this was his 25th Maccabi Games, said “this is a great set of Games,” and was “extremely well organized.”

For Ethan Roseman, this was the first Games on the adult side, rather than as an athlete. “It’s great seeing how the entire city came together” to put on the games, and give the athletes a chance to experience a place they otherwise might not have visited.

Richard Frankoff of Las Vegas, who has been going to Maccabi Games for 20 years, said the Birmingham games had “the right tone, the right message, the right experience for the kids.”

Jed Margolis, executive director of Maccabi USA, said he just returned to the U.S. after being at the World Maccabiah Games in Israel with the 1,100 U.S. athletes that were part of an event with 10,000 Jewish athletes representing 80 countries.

Two weeks earlier, Margolis said, all eyes were on Jerusalem. As the Maccabi Games began, he said “all eyes are on Birmingham.” In his eyes, the Birmingham games were “a huge hit.”

There was universal praise for the community’s “Southern hospitality,” with many saying it wasn’t a surprise.

Kiewe said the facilities were “terrific,” the McWane Center was a great choice for the Aug. 2 street party and he was amazed that organizers were able to get the city to close 19th Street for the event.

Rave reviews came in for the organizers and the volunteers, and how well-run the games were. Many expressed astonishment at what Birmingham accomplished, given the community’s size. A particular challenge was finding enough Jewish households in a community of 6,300 to provide home hospitality to 900 visiting athletes.

At the closing ceremony, Held looked around at all of the athletes, host families and volunteers, and said “this could not happen without everybody here. That’s what makes this so special.”

Roseman echoed that, saying “to put on this, it takes a whole community. An event like this doesn’t happen just because a few people get behind it.”

He said the week “shows the commitment and passion of this community.”

Aside from the opening ceremony’s Matisyahu controversy, which by the end of the week pretty much everyone wanted to forget, Goldberg said “I didn’t hear issues with anything.”

Maccabi fever even extended to areas one might not have imagined, and it was noticed. Many mentioned how the police officers protecting the Games were actively participating while maintaining their professionalism.

At the street party, one of the officers tried his hand at juggling. Others took part in pin trading, and when a Houston athlete missed the bus to a venue, he was given a ride in one of the police cars.

Kiewe said it was “the most engaged security detail, and they seemed like they enjoyed doing it.” At the closing ceremony, as the athletes made their way through the parking lot, they were thanking the officers.

Goldberg said a “unique and different” highlight was having the civil rights focus on Aug. 1 for JCC Cares Day. The teens divided into three groups and rotated among the Civil Rights Institute, Kelly Ingram Park and the Sixteenth Street Baptist Church.

At the church, the teens heard from Carolyn McKinstry, who was in the church on Sept. 15, 1963, when a Klan bomb went off just before services, killing four girls who were her friends.

For the first time, JCC Cares was held on Tisha B’Av. David Ackerman, director of the JCCA Mandel Center for Jewish Education, spoke after McKinstry, tying the 1963 bombing to the lessons of Tisha B’Av — that the ancient Temple was destroyed by hatred without cause among the people, and because people hid behind the law to do the minimum instead of doing more than expected.

“Unfortunately, all you have to do is open a newspaper to recognize that the things that led to the destruction of the Temple and that led to the bombing of this church are still alive today,” Ackerman said.

Weisbrot said the speakers were eloquent and the experience was “unbelievable.”

Reflecting on the week, co-chair Bruce Sokol reflected, “I loved every second of it.”

At the opening reception Sokol took credit for arranging the incredible weather, but Roseman said the San Diego delegation had brought their weather to Birmingham for the week.

The only hitch in the weather all week was a downpour at Birmingham-Southern that delayed soccer finals on Aug. 3, and a shower at the LJCC that hit just before the closing ceremony.

River Bend, a band comprised of students from Mountain Brook High School, started off the evening’s entertainment, while the athletes dined on grilled chicken and rode several carnival rides that were set up on the soccer field. There was also a “silent disco” and henna tattoos.

The evening closed with fireworks and the passing of the torch to Orange Beach, Calif., site of the 2018 JCC Maccabi Games.

Betzy Lynch, executive director of the LJCC, presented miniatures of the Maccabi cauldron to the co-chairs, and told the crowd “we hope you loved Birmingham.”

With the Games concluded, Lynch is moving on to become the new CEO of the San Diego JCC. Roseman said that when people found out he was part of the San Diego delegation, they expressed an assumption that San Diego will be hosting the Games soon. He responded, “after doing these Games, I think she’ll want to take a break for a couple of years.”