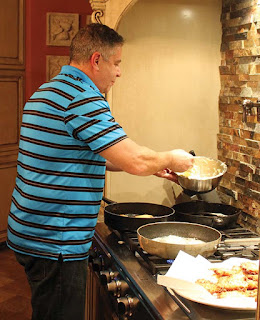 Auburn Head Basketball Coach Bruce Pearl returns to the Magic City on Dec. 16 with his Tigers participating in the first-ever Birmingham Jam at the Birmingham-Jefferson Convention Complex’s Legacy Arena on Dec. 16.

The doubleheader features UAB taking on Alabama A&M at 2:15 p.m. followed by Auburn versus Middle Tennessee State University. The event will have a throwback 1990s theme to enhance the fan experience. Birmingham Jam will be the first multi-game, regular-season event hosted in the arena since 2007.

“We’re looking forward to coming back to Birmingham and participating in this great event,” said Pearl. “We have a lot of Auburn alumni in Birmingham and this is going to be a real treat for the fans.”

Pearl was in Birmingham to speak at the opening ceremonies of the JCC Maccabi Games in late July, and to volunteer support for the successful event.

“Breaking down stereotypes is a huge part of my life,” he said. “To see what the Maccabi Games did to give such a positive impression of Birmingham and the South warmed my heart. There were kids and their parents coming to Birmingham for the first time and they all seemed to have so many great things to say about their time there.”

Pearl, who served as the first president of the Jewish Coaches Association, admits he was nervous when making his speech as a part of the opening ceremonies. “I really took a lot of time to figure out what I could say in 10 minutes that would hopefully have a lasting impact,” he said.

Maccabi has a special place in Pearl’s heart. He coached the gold-medal-winning U.S. team, which featured his son Steven, at the World Maccabiah Games in Israel in 2009.

“That is an experience I will treasure for my whole life. To take 12 Jewish men to Israel and to come back to the U.S. as menches was incredibly meaningful,” he said. “To wear USA on our chests and to have a Star of David in our hearts was special.”

The Birmingham venue is familiar to Pearl. When he was the head coach at the University of Tennessee, his Vols played Butler University in Birmingham in the Sweet 16 round of the NCAA tournament. His Auburn Tigers also played an early-season game at Bartow Arena last year.

Middle Tennessee earned first-round wins in both the 2016 and 2017 NCAA tournaments and “is an experienced, talented team that will certainly give us a very tough test,” he added.

In addition to the games, Auburn and UAB’s men’s basketball teams will participate in an educational community engagement event at the Birmingham Civil Rights Institute on Dec. 15.