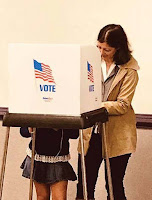 As many seats in the U.S. House of Representatives switched from Republican to Democrat, Elaine Luria was part of the trend in a narrow victory over incumbent Scott Taylor in Virginia’s second district.

Luria, a native of Birmingham’s Jewish community who also has family in New Orleans, received 139,350 votes to Taylor’s 133,335 in the Nov. 6 election.

The district was seen as a possible swing district, having voted for President Donald Trump by a 3 point margin, but in 2017 preferring Democrat Ralph Northam by 4 points in the gubernatorial election.

After her victory, she said she is “honored to once again answer the call to serve our country and look forward to representing Virginia’s Second District in Congress.”

She told Taylor’s supporters that “my door will be open, my phones will be on. And my job now is to work hard for all of my constituents, regardless of who they voted for on Election Day.”

The hard-fought race included allegations that the Taylor campaign was supporting a third-party candidate in an effort to split the opposition, including his campaign staffers allegedly forging signatures on petitions to get the third party candidate on the ballot.

The Friday before the election, Norfolk resident Clair Berube reported that two hooded men knocked on her door and asked if she and her son were planning to vote in the election. When they replied that they were, one of them said not to vote for Luria, using an anti-Semitic slur.

“It’s very unfortunate in 2018 that we have this kind of division in the country and this hatred and polarization,” said Luria. “I feel that people know that when they go vote on Tuesday that they’re really voting for the future of our country.”

Taylor told 13News Now that “Antisemitism and hate have zero place in a civil society. The alleged behavior we were made aware of is appalling and I condemn it in the strongest possible way.”

An Indian Springs alumna, Luria graduated from the Naval Academy in 1997 with a degree in physics and history.

After being commissioned, she served aboard the USS O’Brien, based in Yokosuka, Japan. When she entered the academy, women were not allowed to serve on combat ships, but that ban was lifted in 1995, and she became one of the first women able to serve her entire career on a ship.

When she retired, she was commander of Assault Craft Unit TWO. Under her command, the unit deployed to operations in Honduras, Panama and Norway, and humanitarian and disaster relief operations following Hurricanes Joaquin and Matthew.

In 2013, she also became a small businesswoman, establishing the Mermaid Factory in Norfolk, and later a second location in Virginia Beach. The Mermaid Factory has blank mermaids and dolphins that visitors can paint and decorate.

In her victory remarks, Luria said “I have always been honest about what kind of leader I will be — an independent voice who will put country over party and lead in a bipartisan way. While I will always look for common ground, while I will always be willing to listen, I will never compromise when it comes the Coastal Virginia values of decency, community, and service to country that we all hold dear.”