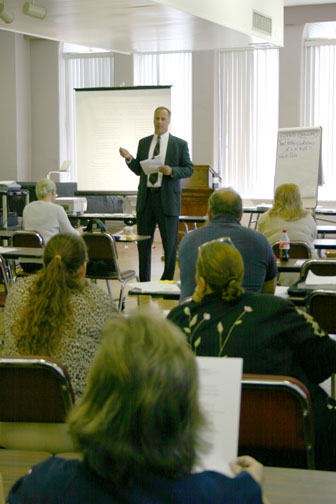 Warren Marcus looked around the room and said to the 30 teachers, “raise your hand if a kid asked (in class) ‘why didn’t the Jews fight back’,” during the Holocaust. Most hands went up.

It isn’t a surprise to Marcus, director of teacher workshops and conferences for the United States Holocaust Memorial Museum.

He was in Mississippi earlier this month for two workshops, the first held in the state since the formation of a Mississippi Holocaust Commission last year. He had a list of several common questions that students have about the Holocaust, and how best to answer them. Whether he is leading a workshop in Alaska, Hawaii, Idaho or New Hampshire, he later said, the questions are
always the same. One of the most common is “Why the Jews?”

For Shirley Shipman-Johnson, the workshops were another step in keeping a promise made to her dying father in 1979.

A self-described “average, ordinary” Mississippi housewife, she was the impetus for forming the commission. A Poplarville resident, her father had been a soldier in World War II and helped liberate the Mauthausen concentration camp.

At the camp, Alvin Shipman met Charles Pilarsky, a Polish prisoner. Pilarsky served as translator for Shipman. After the capture of the camp commander, Shipman and Pilarsky recorded his deathbed confession about the camp. Using photos the Nazis had been taking during the extermination campaign, Pilarsky assembled a few copies of the confession in the camp’s print shop.

Shipman’s superior officers ordered him to destroy those copies. Instead, the day he was shipped out, Pilarsky gave him the one remaining copy.

Shipman sewed it into a pillow and sent it home, where it stayed in a trunk for decades, due to his fear of what could happen to his family if knowledge of the book came out.

In 1979, before he died, he told Johnson about the book and the promise he had made to Pilarsky to tell the story. She promised that she would do something with the book.

In 1999, she contacted the Vanderbilt University Holocaust Studies department, and her book, “A Soldier’s Promise,” was released in 2003, with the complete text of the smuggled work.

Johnson said she did not know any Jews until a few years ago, and wondered why Hitler hated them. She scoured every library, trying to figure it out.

During a visit to the Shoah Foundation in California, she met with a representative who at one point reached over to hold her hand. She could feel the woman’s pulse through her wrist, and suddenly realized that she was asking the wrong question. “When I could feel her pulse, it doesn’t matter why he hated them… I should be using my time to educate so it wouldn’t happen again.”

Ann Gillis is working on a documentary about Johnson’s story. While fact-checking for the film with Sylvia Wygoda, director of the Georgia Holocaust Commission, Wygoda suggested Johnson establish a Holocaust commission for Mississippi. The bill was signed on April 14, 2004.

Johnson told the teachers that “to know that you’re going to teach about the Holocaust, it’s going to bring a difference to this state.”

Judy Couey, bureau director of the Mississippi Department of Education’s Office of Academic Education, said at the April 4 workshop in Long Beach that the teachers there would directly affect over 2,000 students. “How much more can you fulfill a promise,” Johnson said later.

Marcus said he first met with the Mississippi team in October to plan the workshops. A second one was held in Hattiesburg on April 5. “The support from the Department of Education has been outstanding,” he said.

There were many hands-on lesson ideas that he discussed with the teachers, also giving a broad overview of the time period.

One exercise he uses is “assessing and defining responsibility,” where 30 types of individuals are rated on a scale of 1 to 4 on how responsible they were for the Holocaust. The categories range from Nazi officials to apolitical bystanders. Students then debate which categories to discuss, and how much responsibility they have to bear. When students disagree on a
category, some giving a 1 and some giving a 4, “if ever there was a teachable moment,” this is it, he said. “And it spills over into lunch, and into the next day.”

Through that exercise, students explore “personal and civic responsibility, how a government should act and how they should act…there are multiple lessons in the study of the Holocaust.”

A few individuals have been named to the commission, but more appointments are yet to be made. There is also an effort to establish a museum of tolerance in the Biloxi area.

The documentary Gillis is making is “75 percent complete” and they hope to wrap with the 60th anniversary of the Mauthausen liberation in May, if they can find the funding.

There was a private screening in New York of the material they have so far, and “we had the most incredible response.” She admitted that before she started to work on the documentary, she thought, “a Holocaust story out of Mississippi? This is nuts.”

Marcus said the Mississippi efforts will “have tremendous impact. It’s going to be a tremendous ripple effect and a very positive one.”