Not Just Black and White: Civil Rights and the Jewish Community (special series) 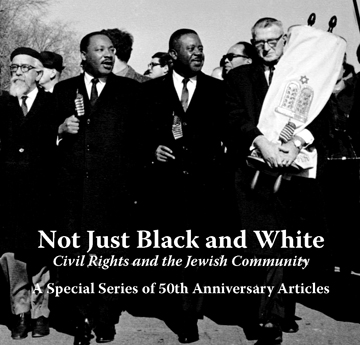 Many pivotal events in the Civil Rights era happened in our coverage area between 1963 and 1965. They include the Birmingham Campaign in early 1963, the bombing of the Sixteenth Street Baptist Church later that year, the 1964 killing of three civil rights workers — two of them Jewish — in Neshoba County, the 1965 Selma to Montgomery march.

For many of these events, there was Jewish involvement, whether overt or behind the scenes. Some of it was controversial within the Jewish community, and not everyone was on the same side. The shorthand of Jewish involvement has been taught as “Jews like Rabbi Abraham Joshua Heschel marched with King and supported the struggle.” It was much more complicated than that.

Many of those stories are little-known today. We are working to uncover them and put them into historical context in an ongoing series, Not Just Black and White.

We chose that title for several reasons. It wasn’t just blacks versus whites, the Jewish community was involved, as were many others. Jews in the South were seen as not quite white, able to pass and fit in somewhat but still not fully accepted among whites, and regarded as not like the “other” whites by blacks. And as many of these stories show, while much of the teaching about the era simplifies it into good versus evil, right versus wrong, as with all conflicts there were many grey areas — it wasn’t all black and white.

Praying With Their Feet: Shabbat in Selma. An Orthodox congregation from Washington does a civil rights Shabbaton in Selma over Martin Luther King Jr. weekend (February 2017).

Honoring two Jewish Abrahams in Alabama (October 2015)
Redigging the Wells honors the legacy of Abraham Mordecai, who brought the first cotton gin to Alabama, and Rabbi Abraham Joshua Heschel, who marched in Alabama during the civil rights demonstrations of 1965.

Rosenwald film details the century-old partnership that led to the building of over 5,000 schools for blacks in the rural South (October 2015)

A Welcome Return to Selma: Hundreds of Jewish marchers convene at Mishkan Israel for a 50th anniversary ceremony of civil rights demonstrations (April 2015)

Kaddish for Four Little Girls: Rabbi Grafman’s 1963 Rosh Hashanah Sermon (September 2013)
The eve of Rosh Hashanah, Rabbi Milton Grafman attended the funeral of three of the four girls killed in the Sixteenth Street Baptist Church bombing. He then discarded his prepared remarks and spoke off the cuff in a 40-minute blistering message about the year’s civil rights battles in Birmingham.

Bearing Witness: A controversial 1963 trip to Birmingham by 19 rabbis (May 2013)
In the midst of Birmingham’s Children’s Marches, 19 rabbis decide to show up unannounced in Birmingham to show their support. For several reasons, that didn’t go over very well in the local Jewish community.

Rabbi Grafman, Dr. King and the Letter from Birmingham Jail (expanded from print version, April 2013)
How eight moderate clergy who had stood up to Wallace’s segregation rhetoric months earlier were unfairly tarred by history through Dr. King’s rhetorical masterpiece.

Taking a Stand After the “Segregation Forever” Speech (January 2013)
Two rabbis were among the moderate clergy to stand up for common sense after Wallace’s inauguration speech.

Asa (or Forrest) Carter: Reconstruction of a virulent anti-Semite (June 2012)
Ace Carter penned Wallace’s immortal “Segregation Forever” speech, then was a literary darling years later under a different name for the multiculturally sensitive “The Education of Little Tree.” How?

Scottsboro: A Southern Tragedy, a Jewish Controversy (March 2011)
Reaction to the Scottsboro Boys’ New York Jewish attorney was the prototype for how Jews would be looked at with suspicion by segregationists for decades to come.