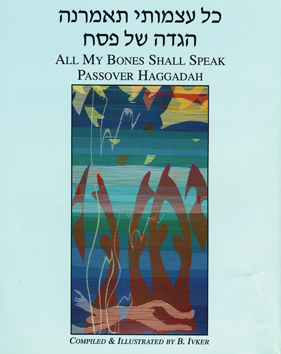 To borrow a concept from the Passover Haggadah, had Barry Ivker been able only to present his three children with copies of a family Haggadah he complied, “Dayenu.”

Instead, he was able to sell about 1200 copies of “All My Bones Shall Speak” before Hurricane Katrina destroyed the rest of the printing. Now, he has come out with a second edition.

Ivker, who resettled in Birmingham after Hurricane Katrina, said he has hosted Seders at his home for 30 years. When his children attended the Lakeshore Hebrew Day School in New Orleans, they brought home new material for the Seder, which he incorporated into the evening.

“Part of what I wanted to do” with the Haggadah “was acknowledge their contribution to the Seder.”

He wanted to create a book that “the educated layman” could use. It has a traditional text, along with transliterations for those who want to learn Hebrew. There is also what he calls five times the amount of commentary that anyone could use for a Seder, but that enables one to use different material each year.

Central to this Haggadah is a series of 111 artworks of his that he calls “visual midrash.” It took him five years to complete the series.

The new edition has only minor changes from the first. He added the Miriam’s Cup and changed some of the section on women’s roles. “If it were not for the virtuous women, there would have been no Exodus,” he noted.

When he was a child, Ivker said, the women played no role at the Seder table, and the men would recite the Haggadah by rote, not really knowing what they were saying.

He and his sister would ask questions. “We’d find parts of the text humorous, the language arcane, the logic a little ridiculous,” he said, adding that they did not have the background to understand what the texts were trying to convey. The commentaries he included give some background for many of the more perplexing passages.

Some of the pieces from “All My Bones Shall Speak” were exhibited at the New Orleans Museum of Art, and in 2006 he was one of seven artists featured at the Washington Jewish Community Center’s exhibit, “Different Nights: Interpretations of the Seder by Contemporary Artists.”

Just before Katrina struck, Ivker was officiating a wedding. Returning home for a few hours before evacuating, he moved the original artwork to the second floor. His wife, Fran, asked “what are you doing? We’ve never flooded before,” but they discovered there was a first time for everything.

While the artwork was saved, about 3800 copies of the Haggadah were not. And like so many Katrina losses, insurance did not cover that.

A Philadelphia native, Ivker attended Indiana University during the Vietnam era. Looking for something positive to do during a tumultuous time in history, Ivker said fellow students spoke of going to predominantly black universities to teach.

“I felt this was a time to get involved, there were exciting things happening,” he said.

He looked at a map. “I didn’t know the Deep South at all,” he said. They first chose Atlanta, but his wife found a greater bias against women than against blacks when applying for positions.

Instead, she found a position at the University of New Orleans and he wound up at Dillard, where he taught for 11 years. He then taught at Xavier University for five years.

The Ivkers settled into active roles at Tikvat Shalom, now known as Shir Chadash in Metairie.

At Indiana, Ivker had taught a class on literature and the other arts. After a few years, he decided to try his hand at the other arts. “I didn’t have a good handle on it for seven or eight years.”

Then he picked up the overlay technique, and “I began to know where I was headed.” It is a tedious technique, but “even the tedium can be restful.”

As a scholar working in the field of words, he said, it was “very liberating” to work with color and form.

He finds inspiration in the style of Matisse, “irreverent and celebratory, coming out of his own incapacities.”

His series on the sons of Jacob, along with Dinah, is on display at Shir Chadash. He also has works on display at Chabad in New Orleans, Anshe Sfard, Temple Sinai, the New Orleans Jewish Day School and the rehab unit at Touro Infirmary.

He has also done series on the Intifada, Sept. 11 and “After Katrina.” He is now working on a series from the Book of Esther.

Ivker said he works best artistically if it is a series of pieces. “It enables me to sustain focus for a long period of time.

Also lost in Katrina were manuscripts for other projects, from “Song of Songs” and “Ruth.”

The Haggadah is available directly from Ivker, or at the Temple Beth-El Gift Shop in Birmingham and the Shir Chadash Gift Shop in Metairie. A website is in the planning stages.

Though the Haggadah is filled with color images, Ivker said he wanted to keep the cost down so people would buy copies to use, rather than just display one copy on a coffee table. Copies ordered directly from him are $25 plus shipping.