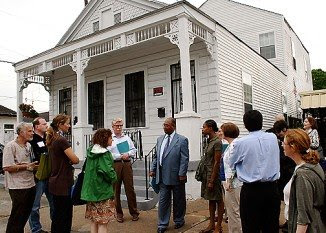 Interfaith partners from the Isaiah Funds project stand in front of a New Orleans home renovated with money from the fund.

The traditional Southern community that was nearly destroyed by the hurricane on Aug. 29, 2005 has been energized by an influx of young newcomers and has a new pioneering spirit, community leaders say.

“We are moving from a community in recovery to a community of transformation,” said Michael Weil, the executive director of the Jewish Federation of Greater New Orleans. “Our agencies and synagogues are now mostly back on track.”

Weil says, however, that the community isn’t merely interested in returning to where it was before the storm.

“Katrina has given us the opportunity to reinvent an entire American Jewish community,” he said.

While the first two anniversaries of the hurricane were marked by exhaustion, reconstruction and the consuming effort of getting lives back to normal, this year’s Katrina anniversary is being met with cautious optimism.

Jewish community leaders say the recovery effort has turned a corner and they are looking forward to a richer and more vibrant community.

Newcomers, estimated at 10 percent of the Jewish population here, already are having a significant impact on the community. In one example, enrollment at the federation-sponsored community day school, which fell by nearly 75 percent after Katrina, has nearly doubled from last year.

Some 600 Jewish newcomers have moved to New Orleans since Katrina, some no doubt drawn by the federation’s Newcomer Incentives Program. The program offers eligible newcomers up to $5,500 for moving and rental housing expenses, interest-free loans of up to $30,000 for housing and business start-ups, half-price tuition at the community Jewish day school and a year’s free membership at a synagogue of their choice, the JCC, local Jewish organizations and even JDate.

An extension of the Newcomer Program called JGRAD launched this month with the aim of keeping Jewish graduates of Tulane and other local universities in New Orleans. The program matches them with a job counselor and provides rental grants, help in repaying student loans and a signing bonus of $500 when they land their first job.

Until recently, most of the newcomers have been single and married young professionals without children. But now families with young children are coming, too, says the newcomer program’s director, Jennifer Samuels.

“This is a really strong vote of confidence in the future of New Orleans and the vitality of our Jewish community,” Samuels said.

One family — Mardi Steinitz, Patrick O’Connor and their son, Rowan — moved here from Philadelphia when Rowan was 3 months old. Patrick works as a producer for a local television news show; Mardi is a stay-at-home mom.

“Before we moved here, all I knew about New Orleans was the negative things I had heard on TV,” Mardi told JTA. “But I have fallen in love with it, much more than any other place I have lived before. This is really like a small town where everyone is so friendly and warm. It is so easy to make new friends, and I can walk everywhere.”

“New Orleans is probably the fastest growing Modern Orthodox community in the country today, percentage-wise, with the four new families that have moved here recently,” he said. “In a small Jewish community like New Orleans, every new observant family really makes a significant impact. Because kosher food and day school are priorities for these families, they help strengthen the institutions that the entire Jewish community can benefit from.”

Beth Israel has launched an effort called The Minyan Project to attract 10 new Orthodox families to the community. In return for generous financial assistance, the families will commit to providing community service, from maintaining the eruv enclosure that’s due to be completed within the month to assisting in kosher supervision at a local supermarket.

Three years after Katrina, the flow of Jewish volunteers to New Orleans from synagogues, Hillel campus centers and schools across the country has not decreased, either.

Some of the estimated 10,000 Jewish volunteers who have come to New Orleans since the hurricane to rebuild flooded homes and beautify damaged neighborhoods have moved to the city, and others have returned multiple times.

Nine young Jewish volunteers will arrive this fall for a year of community service under the auspices of Avodah: The Jewish Service Corps, which is opening its fourth site in the nation in New Orleans.

Starting in September, the volunteers will join staff at nonprofits that provide legal services, health care, and social and educational services to Louisianans in need.

The volunteers’ communal home will serve as a hub of Jewish programs for Jewish young adults in the area.

One of the volunteers, Eliza Baron of Millburn, N.J., came here in December 2005 to help gut homes damaged by the storm.

“I was struck not only by the obvious devastation, but also by the love, loyalty and pride for New Orleans that was emanating from nearly every New Orleanian I met,” she said. “I found the sentiment to be contagious and have jumped at nearly every opportunity I could to volunteer in a variety of ways since.”

Under Avodah, she will be working as a client welfare specialist at the public defender’s office.

In another long-term commitment to the recovery of New Orleans, Jewish Funds for Justice is playing a leading role in an interfaith partnership, the Isaiah Funds, which provides $4.5 million in loans and grants to the Gulf Coast.

On Friday, Jewish Funds for Justice will launch the first person-to-person microloan program in the country, called 8th Degree. It will partner with contributors nationwide to provide loans to small business owners on the Gulf Coast.

“Though much of the Gulf Coast has regained the appearance of normalcy, low- and moderate-income communities are still very much in need of patient, low-cost capital to rebuild their neighborhoods and businesses,” said Jeffrey Dekro, the executive director of Jewish Funds for Justice. “The Isaiah Funds represent the highest degree of tzedakah.”

Despite all the energy, continuing to develop the Jewish community will require significant funding, including from sources outside the community. This month the federation is launching a $30 million fund-raising campaign called the Fund for the Future.

“With disaster comes opportunity, and this funding will enable us to take advantage of this historic opportunity now to transform an historic American Jewish community,” Weil said.

(JTA Staff contributed to this report.)