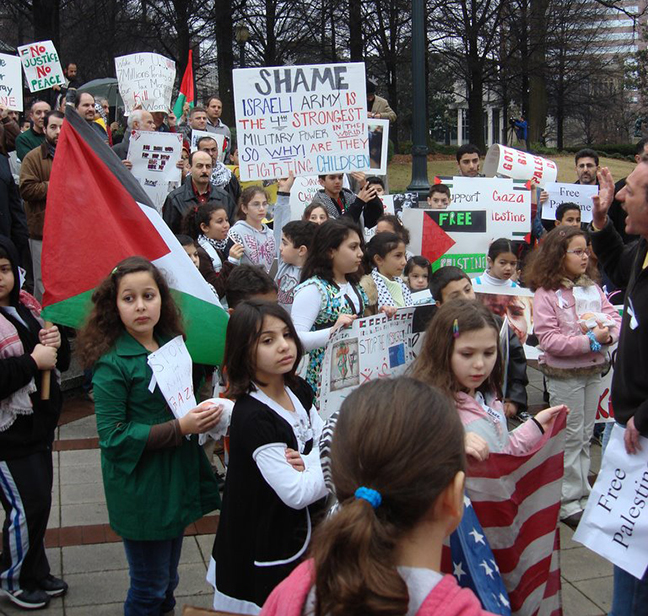 There were many children at the rally, echoing a main theme of the protest

For Kirk Epstein, it was often a struggle to get his message across.

Some attending the rally often attempted to surround him with their Palestinian flags and posters. At one point, a woman in the crowd of about 250 shouted “murderer” at him.

The rally was part of three days of activities by local Muslims, starting with an event at the Hoover Crescent Islamic Center on Jan. 8. In addition to the Islamic Society, the events were sponsored by the Birmingham Peace Project, National Lawyers Guild and Christian Peacemaker Teams.

About 200 members of the organizations were at what had been billed as a press conference. 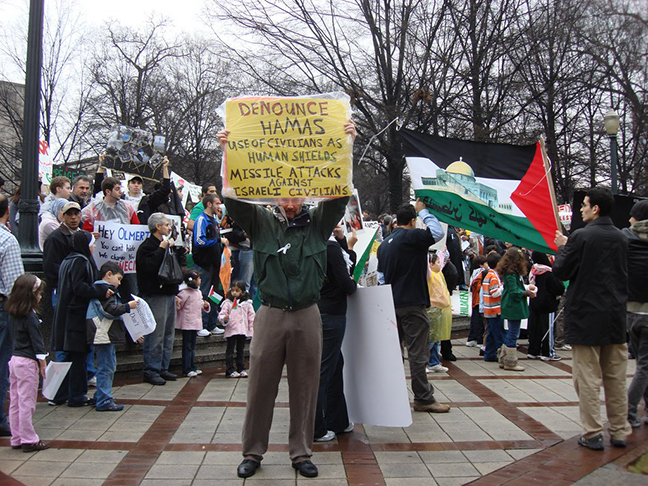 Abdullah Kendrick and Sammy Kanpher showed a Powerpoint presentation giving some historical background from the Palestinian perspective, and showed numerous slides of children’s bodies in Gaza. There were also slides that purported to show Israeli soldiers pointing guns at children, and the speakers accused Israel of using Palestinians as human shields.

A large number of signs at the rally and at the press conference criticized Israel for allegedly trying to fight against children.

U.S. aid to Israel was also criticized. Kanpher said “we talk about our bad economy, homeless people… and we are sponsoring that killing.”

Tunnels under the border between Gaza and Egypt, which Israel is destroying because they are used for weapons smuggling, were characterized as being for bringing in food.

Likewise, the missiles sent by Hamas into southern Israel were minimized as little more than fancy July 4th fireworks, and were a response to Israel’s “blockade” of the strip.

David Gespass, representing the National Lawyers Guild, read a statement condemning “the illegal and inhumane killing of the Palestinian People living in the Gaza strip by the Israeli forces.”

The statement characterizes Israel as causing a “humanitarian catastrophe” and urges “our government to reevaluate its unconditional support for Israel and make it clear to the Israeli leadership that nothing can excuse nor justify targeting innocent civilians, charities, hospitals, pharmacies, mosques and universities, causing maximum casualties.”

In the seven paragraphs, there was one mention of the rocket attacks against Israel. “Of course our organizations do not condone the killing of any innocent people including Israeli civilians hit by Hamas Rocket attacks.”

On Jan. 9, the Islamic Academy of Alabama held a silent demonstration.

The Birmingham Jewish Federation issued a statement supporting the groups’ right of free speech, but “What is perplexing and frustrating, however, is that we never hear from groups such as the Birmingham Peace Project when Hamas fires rockets into Israel, killing Israeli civilians with no provocation, or when suicide bombers blow up Israeli civilians in malls and restaurants.

“While the innocent casualties in Gaza are tragic, it’s important to remember who is to blame. For eight years, Hamas has fired deadly rockets to kill civilians in southern Israel. Finally, after asking Hamas to stop and providing warnings, Israel has responded to protect its citizens. Isn’t this exactly what we would want and expect our own country to do under similar circumstances?”

The statement also reminds that Israel left Gaza three years ago, making talk about “occupation” moot, and that the rocket attacks against Israel increased after the withdrawal.