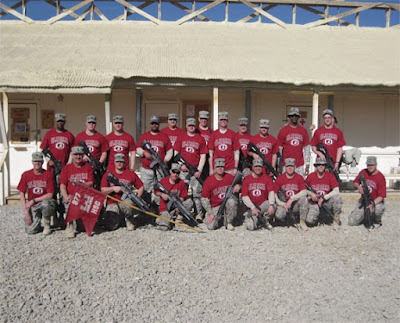 Chanukah wasn’t the only eight-day miracle this past December.

A spur of the moment thought by Montgomery’s Bette Sue Strasburger to send a couple dozen Alabama T-shirts to local soldiers fighting in Afghanistan quickly mushroomed into an effort that provided 1,400 shirts — one for every Alabama National Guard member stationed in Iraq, Afghanistan and Kuwait — in time for the BCS National Championship Game against Texas.

A couple of days after Alabama defeated Florida in the Southeastern Conference Championship game, Strasburger was watching “The Today Show.” Host Matt Lauer was in Afghanistan, and in the background a soldier was waving an Alabama shirt, no doubt celebrating the conference title.

“He was grinning from ear to ear,” said Strasburger. If that shirt could bring that soldier such joy, she thought, why not send some more Alabama shirts to the troops?
She figured on sending about 30 shirts. That night, she mentioned her idea at a meeting of her investment club, and “people started writing checks.” The same thing happened the next morning at Tai Chi, and within 24 hours she had $400.

Not having much experience with the military, she went to the local National Guard office and asked about how to cut through the red tape to get the shirts delivered in time for the national championship game. “He said, I’m your red tape,” she recalled. At that point, she knew it could be done.

That night, she was at Temple Beth Or, where another member overheard what she was doing, and told her to go to the shirt manufacturer, who he knew. So while word of the project spread among Beth Or members, then to Agudath Israel-Etz Ahayem, she met with the manufacturer — and had a major decision to make.

The manufacturer said he needed a guarantee of 800 shirts. Only two days into what had been a small project, she decided that momentum was building to where 800 would be possible.

Within two days, she was guaranteeing another 600, enough to supply all Alabama National Guard units.

By the weekend, the first 800 were ready and were shipped out, with notes “To Our Heroes in Uniform from Alabama.” The other 600 soon followed, completing the mission in eight days.

Strasburger, an Alabama graduate, said the project cut across the traditional football affiliations in the state.

Contributions came in from New York, Florida — even Texas. But the most colorful were contributions made by Auburn fans. Strasburger’s neighbor, an Auburn fan, said she couldn’t believe she was actually giving money for Alabama shirts.

Her son and son-in-law, also Alabama alumni, sent emails to their friends across the country, gathering support for the project.

“It is something I would never have dreamed in my wildest dreams,” she said. “I honestly was thinking 30 shirts.”

After the first of the year, Strasburger started receiving letters from the troops. With the time difference, they were up in the early-morning hours to watch the game, wearing their shirts.

The recurring theme in the letters, she said, was “thank you for remembering us.”
She added, “That really summed it up. The shirts were great, but to be remembered was wonderful.”