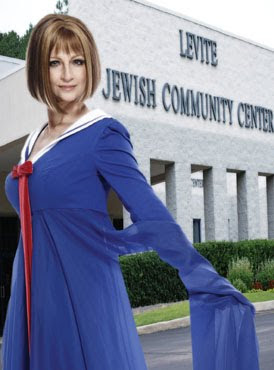 Old memories will be revisited and new “Memories” will be made on May 1, as nationally acclaimed Barbra Streisand tribute artist Carla Del Villaggio headlines a gala celebrating 50 years of theatre at Birmingham’s Levite Jewish Community Center.

Theatre LJCC, which was known until the early 1990s as the Center Players, has been a fixture of the local theater scene.

Del Villagio entitles her show “Then and Now… a Tribute to the Artistry of Barbra Streisand.” “I believe that Barbra Streisand is the greatest entertainer of my lifetime. I have been a big fan of hers for many years and I have worked hard to make sure that my tribute to her reflects very favorably as well as respectfully on her illustrious career,” she said. “The show goes back to the ‘vintage Barbra’ of the ‘Funny Girl’ 60s, up through her contemporary performances. There is so much good material to work with.”

“Barbra was always my hero and idol growing up but I never thought about a career as a tribute artist. On day a few years ago, my husband (Paul) got me out to sing some karaoke so of course I did some of her songs,” she said. “He and some friends convinced me to enter the Sunburst Convention of Professional Tribute Artists in Orlando (in 2006). I was encouraged by the response and thought I would see where this would go. That’s when things took off.”

Even though Del Villagio had been told she sounded like Streisand when she sang and spoke, the college professor starting doing a great deal of homework on the celebrity. “I studied her dialect, her mannerisms, and her vocal style. I had been trained and performed as a classical (and operatic) singer and I had to learn Barbra’s ‘Broadway’ style,” she said.

In 2006, Del Villagio got to see Streisand perform live in South Florida and started to get some bookings for her tribute act. It started with private events and crescendoed into Jewish community centers along with synagogues across Florida, then across the Southeast.

“I have seen her perform live, but I have never met her. If I did I would be so awe struck I wouldn’t know what to say,” she said. Del Villagio has some friends in California who are friends with Streisand’s agent. She isn’t certain, but believes Streisand has seen videos of her tribute act and is pleased. “If she has seen it and I am sure she can see how much love and admiration I have for her work. I know she has even hired tribute acts to perform at parties, so she is positive about us.”

At one of Del Villagio’s JCC performances, an elderly woman was moved to tears by the program. “She was a Holocaust survivor. I was really moved at how it moved her. Barbra does that to people and I hope I can bring a lot of that out in my performances,” she said.

Del Villagio was the 2008 winner of Agent’s Best Impressed Award at the Sunburst Convention of Professional Tribute Artists; 2009 winner of the Overall Best Celebrity Re-Creation Award, and the 2009 Rising Star Award at the Celebrity Impersonator Convention in Las Vegas.

Through she has performed in a few cities across the region, this will be her first time in Birmingham. “Paul and I are looking forward to exploring the city as well as getting to know the fine community. We’ve heard some wonderful things about the LJCC and its rich history of theatrical entertainment,” said Del Villagio.

General admission for the 8 p.m. performance is $25 per ticket for the special evening. VIP tickets can be purchased for $50 each ($50 for 50 years) and include preferential reserved table seating; wine with a cheese plate and photo opportunities. A VIP table for eight can be purchased for $350 (the cost of seven tickets). Reserve at www.bhamjcc.org or by calling (205) 879-0411.