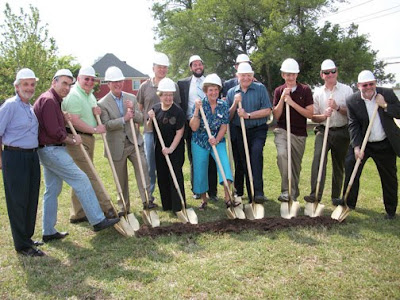 With the theme “L’dor v’dor” — “from generation to generation” — members of Congregation Beth Israel began the exciting and bold step of breaking ground on April 18 on a parcel of land in Metairie that will serve as their new spiritual home.

The land purchased from Congregation Gates of Prayer this past year is on a plot adjacent to Metairie’s only Reform congregation, which is also the place Beth Israel has called home since 2006. That was when Rabbi Robert Loewy and his congregation extended an invitation to members of the Hurricane Katrina-destroyed Lakeview Orthodox congregation to meet in a small chapel and multi-purpose room at the rear of their building.

Rabbi Uri Topolosky, whose appointment as spiritual leader of Beth Israel three years ago has galvanized the tempest-tossed synagogue and directly brought about the rebuilding effort, expressed thanks to the Jewish Federation of Greater New Orleans, community leaders and colleagues for their support of the congregation in the times since the flooding.

He noted that the very first groundbreaking described in the Torah occurred when Jacob slept upon 12 stones, representative of the 12 future tribes, and experienced the famous dream of the celestial ladder. Topolosky recalled the Jewish patriarch as holding up his stone pillow and declaring: “’This stone, which I have set up as a pillar shall become a house of God,” he quoted the scripture. “’And whatever You will give me, I shall repeatedly tithe it to you.’ ”

He amplified the theme for the groundbreaking by noting that the message that resonated most with him was the Hebrew word “ehven” (stone) formed by three Hebrew letters of an aleph, bet and nun, the first letter standing for av (father) and the second letter standing for ben (son). “I think what he is also saying is that the foundation for that house of God will be built on the combination of av and ben – on the strength of generations. With the blessing of ‘l’dor v’dor’.”

Event chair and former Beth Israel president Mike Gertler invited members of the Gothard and Katz families to be recognized for exceptional “cornerstone” gifts of $100,000 each to the $3.5 million capital campaign.

Congregation Beth Israel president Roselle Middleberg Ungar was presented with a plaque bearing the image of a shovel by her son Hal. The plaque acknowledged her stewardship of the capital campaign that has brought in nearly $2 million. Ungar reminded attendees that several naming opportunities for various rooms and places in the structure are still available.

Mildred Covert was asked to deliver some words on behalf of the older congregational members, tying together the former spiritual home of the congregation on Carondelet Street in Central City and the former Lakeview site with the new synagogue site.

Members of the Beth Israel executive board and present administration – along with representatives of the Gothard and Katz families – donned helmets and broke ground with ceremonial gold shovels, signifying the beginning of the first phase of construction, expected to be completed in 2011.

Over a dozen children from the synagogue were also given an opportunity to break ground with plastic shovels and replicas of hard hats along with Covert, signifying the ceremonial joining of the older generation with that of the newest members.

The plans for the new synagogue, along with detailed drawings were on display at the event. The plans were drawn up and submitted by Brawer and Hauptman, a Philadelphia architectural firm that specializes in synagogues. Several select committees and the Beth Israel general membership have tentatively approved the plans. The next major move by the congregation will be to put the work out for bid by interested construction firms.