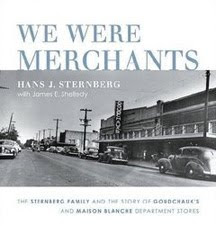 The story of one of the South’s most beloved names in retailing begins with a smuggling operation out of Nazi Germany. That story will be recounted by Hans Sternberg, author of “We Were Merchants: The Sternberg Family and the Story of Goudchaux’s and Maison Blanche Department Stores,” at the Young Family Lecture, May 23 at Touro Synagogue in New Orleans.

Eli Evans, regarded as the pioneer writer of Southern Jewish history, will join Sternberg for the program. Evans is president emeritus of the Charles Revson Foundation in New York, and author of books including “The Provincials: A Personal History of Jews in the South,” “Judah P. Benjamin: The Jewish Confederate” and “The Lonely Days Were Sundays: Reflections of a Jewish Southerner.”

The noon lecture and brunch is a presentation of the Jewish Endowment Foundation of Louisiana.

With a mercantile line extending back five generations to a small shop in eighteenth-century Germany, the Sternbergs were born to be retailers. In 1936, as Nazi harassment of Jews intensified, Hans’ father, Erich, smuggled $24,000 out of Germany and settled in Baton Rouge. His wife and three children joined him a year later, and Erich bought Goudchaux’s and set about transforming it from a nondescript apparel shop into a popular department store.

In 1960, Hans and brother Josef took over the store until it was sold three decades later. The book details the manifold challenges of operating the store — from planning financial strategies and creating marketing campaigns to implementing desegregation and accommodating the repeal of blue laws.

Through a myriad of transforming events — including the death of Erich in the 1960s and the purchase of New Orleans retail icon Maison Blanche in the 1980s — the Sternbergs successfully maintained the company’s core values and remained an institution synonymous with quality and customer service.

At its height, Goudchaux’s/Maison Blanche operated 24 stores in Louisiana and Florida and employed more than 8,000 people. In 1986, Ripley’s Believe It Or Not noted that the Main Street store was the longest building in the world built as a department store — 971 feet in length.

With the economic downturn of the early 1990s, Hans made the difficult decision to sell the business, thus bringing an end to the Sternbergs’ centuries-long mercantile tradition.

“Hans Sternberg is a Louisiana legend whose story has resonance for Jews across America,” said Evans. “The story of a family that fled Nazi Germany in the 1930s to build success that began in Baton Rouge and spread throughout the South is compelling, as is the warmth of Hans’ delivery. It is also the story of how emigrants helped build a family, a life and a community that came to love and respect them.”

The May 23 discussion and presentation will feature a window into his life through photographs of Sternberg’s family and stores. The presentation will be historical, sociological and a study in the Jewish roots behind a successfully executed business empire, from creation to the exit sale of the stores.

Added Evans: “’We Were Merchants’ is a book that is factual enough to be used as a text in business schools. It gives behind-the-scenes views in business deals, community involvement and the spirited ideas behind the creation of a Southern retailing empire that put its customers at the very center of its business. It is unusual for a reader to be taken inside the intricacies and personalities of a business deal and given the opportunity to almost participate in the personal and economic issues faced in building, running and ultimately selling a department store chain.”

The book also is a window on Baton Rouge, from how the Jewish community fit into civic life to the turmoil of the civil rights era and the development of suburbs to the detriment of downtown shopping.