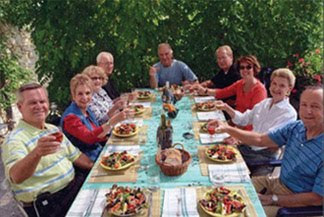 While last year’s “Julie and Julia” movie brought French cooking, cuisine and culture back into the national spotlight, it’s always been an important part of Louisiana’s heritage.

David and Anne Reinauer, members of the Lake Charles Jewish community, have for several years offered interested “foodies” a once-in-a-lifetime opportunity to vacation to the south of France while learning from expert chefs as well as food growers and makers.

The next French Cooking Classes trips will be during the first couple weeks in September, with only eight slots available per one-week session.

“Growing up in Lake Charles, we learned a lot about the history and culture of France. They have to teach French in all the elementary schools in Louisiana,” said Anne Reinauer. “David and I went to Paris on our honeymoon. It was our dream for years to share with others our love for the culture and cuisine.”

In the mid-1980s, the Reinauers took the risk going in for 50 percent ownership on a large house in the south of France that needed much repair. They packed up and moved to the country with their teenage kids for a few years, renovating the facility and turning it into a bed and breakfast.

“This is in south France, in the countryside. Very few people spoke English. We really had to heighten our knowledge about the language and customs,” said Anne Reinauer.

She said the closest synagogue was an Orthodox congregation in Marseilles, so it was difficult to be as involved in the Jewish communities as they had been in Lake Charles. “But everyone there that knew we were Jewish were very accepting and nice.”

The family moved back to Lake Charles as the kids prepared for college, but they held on to the place in south France.

The school board told Anne they needed a French teacher and hired her. “I had never taught before. I got accredited while I was teaching. If you live somewhere you learn so much more about the culture and the language, especially from a conversational standpoint. I was able to teach my students these things,” she said.

About 10 years ago, the Reinauers started the French Cooking Classes trips, which go in June and September. They met up with renowned New Orleans Chef Daniel Bonnet. Born in France and trained by some of the top Parisian chefs, Bonnet moved to New Orleans in 1979. He was proprietor/chef at Chez Daniel and more recently Bizou.

Anne Reinauer said the trips are for those with all levels of culinary ability. Most people fly into to Paris and then come down to the Provence region. The bed and breakfast is an 18th-century farmhouse 20 minutes northeast of Nyons.

In addition to staying, cooking and learning there, participants go on excursions across the region to goat cheese makers, chocolate makers and the “University of Wine. It’s a very hands-on experience in just an amazing part of the world,” she said.

David owns a real estate firm in Lake Charles and the Reinauers spend 8 or 9 months a year there, while the other 3 to 4 months are spent in the southern France countryside. During the year, they also rent out rooms at the bed and breakfast in France.