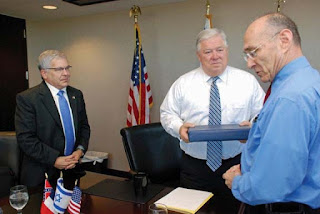 Israel’s Minister of National Infrastructure, Dr. Uzi Landau, stopped in Mississippi as part of a visit to the Southeast in early October. His visit was to strengthen political and economic ties between Israel and the region. An initiative of the Jewish National Fund, Landau’s trip centered on a speaking engagement at the organization’s National Conference, but the Consulate General of Israel seized the opportunity to connect Landau to regional business, academic and religious leaders.

Consul General of Israel, Opher Aviran, saw Landau’s visit as a prime opportunity to advance the Consulate’s goals in the region. “Minister Landau is a former Minister of Homeland Security and holds a Ph.D. from the Massachusetts Institute of Technology. His extensive security and technical background make him the perfect person to further Israel’s political, economic and security dialogue in the region,” said Aviran.

Landau’s trip served multiple purposes: to disseminate a clear message about the Iranian threat to the free world, share the country’s leading green technology in the area of renewable resources and see first-hand examples of the fruitful partnership between Israel and the Southeastern States.

Landau met with lawmakers and business leaders in Mississippi in an effort to bolster relations between Israel and the Magnolia State. Accompanied by Aviran and Mississippi Secretary of State Delbert Hosemann, Landau toured the new facilities of Stark Aerospace, a subsidiary of Israel Aerospace Industries, in Columbus. Stark Aerospace produces drones used by the U.S. in Iraq and Afghanistan.

Landau proceeded to Jackson to meet with Mississippi Governor Haley Barbour. Landau cited Stark Aerospace’s success as a prime example of healthy business partnership between the two governments. “Stark Aerospace is proof of our commitment to having future business relations with the people of Mississippi,” said Landau.

Barbour boldly espoused his support for Israel during the meeting as well. “Israel is the friend of the United States in the other side of the world,” said Barbour. The governor spoke fondly of his previous visits to Israel and told the delegation he will be pleased to visit again.

Landau also traveled throughout Georgia, speaking about Iran’s goal of becoming a world power. “(To Iran) Israel is just the ‘Small Satan.’ The United States is the ‘Big Satan.’ The Iranian threat to Israel and the U.S. is real and must be stopped at all costs for our world to survive,” Landau told listeners at The Temple in Atlanta.

Georgia Tech students of the Sam Nunn School of International Affairs were treated to a similar lecture by the Minister. While on campus, the Minister met with Georgia Tech’s new provost, Dr. Rafael Bras, and lunched with faculty.

Landau touted energy independence as a specific means to counter terrorism. He told business leaders at a breakfast organized by the American Israeli Chamber of Commerce in Atlanta the “name of the game is oil replacements.” Oil sale proceeds are widely known to finance terrorist organizations in Saudi Arabia, Libya and Iran.

In a lecture largely focused on renewable resources, Minister Landau spoke at the AICC event about Israel’s challenge and success in maintaining its water supply and discovering and implementing greener energy. Landau conveyed the importance of the water issue to the Israeli government calling it a “top priority being addressed in the Cabinet” and touted Israel’s desalination plants and sewage recycle facilities as examples for the Southeastern U.S. and the rest of the world in water retention.
Israel is the world leader is sewage recycling with over ninety percent of its sewage being purified at recycling plants. Seventy five percent of the recycled water is used in agriculture. Spain follows Israel at a rate of 19 percent recycling.

As for cleaner energy, Israel is turning toward other sources such as natural gas, wind and solar energy to fuel its society. “We wish to reduce emissions and we want to produce energy with the least pollution to the environment,” said Landau. Israel is actively exploring potential natural gas fields and investing in a wind energy project in the Golan Heights.

AICC President Tom Glaser said Landau’s information “resonated with local challenges.
“We plan to forge partnerships in the Cleantech sector that will benefit both (the Southeast and Israel),” said Glaser.