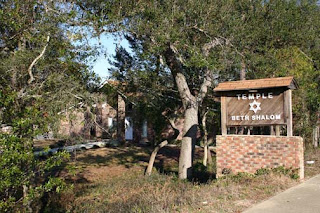 Twenty-five years, Rabbi Mark Washofsky presided over the dedication of Temple Beth Shalom in Ft. Walton Beach. The son of founding members Sonia and Ralph Washofsky will return to provide an address at the congregation’s 25th anniversary next month.

Other charter members and rabbis who have served the congregation will also be on hand for the celebration. There will be Shabbat evening services on Nov. 5, and a gala dinner on Nov. 6, with Washofsky’s address.

The congregation’s roots date back to the early 1970s, when Judge Erwin Fleet led a group of Jewish men in the area that would later form the Jewish Community Center of Okaloosa County. Funds were raised for a building on land partly purchased but largely donated by Steve Schilder.  Erected under the guidance of Moe Hersh, a local builder, member and City Council member, the group finally had a “home.”

Temple Beth Shalom was organized as an outgrowth of the JCC during the summer of 1985.  Through the auspices of Rabbi Washofsky, the Temple was granted a charter as a member congregation of the Union of American Hebrew Congregations (now the Union for Reform Judaism) that November.

The Steven Sandler family provided the means to obtain a Holocaust Torah from the Westminster Synagogue in London.  This Torah, inscribed around 1800, was one of five owned by the synagogue in Ledetsch, Bohemia, in the current Czech Republic.  The Jewish Community of Ledetsch was liquidated by the Nazis in 1942.  Frank Steiner, a native of Ledetsch, and his wife Hana were instrumental in the distribution of Czech Torahs under the auspices of the Westminster Synagogue to congregations all over the world.  Until a new Torah was purchased in 1992, Congregation Adath Jeshurun, of Louisville, Ky., loaned Beth Shalom a second Torah through the auspices of charter member Irvin Cohen.

Originally all of the religious services were lay-led.  In 1986, the congregation secured the services of a student rabbi, Gary Mazo, from Hebrew Union College-Jewish Institute of Religion in Cincinnati. In 1994, Mazo was assistant rabbi of M’kor Shalom in Cherry Hill, N.J., when Carol Neulander, wife of the congregation’s senior rabbi, Fred Neulander, was murdered. The case became a media sensation, and Rabbi Neulander was later convicted of hiring a hit man.

From 1994 through 1999, Beth Shalom retained the services of a resident rabbi, Mitchell Smith, but otherwise has participated in the student rabbi program.

A classroom wing was added in 1988, almost doubling the size of the Temple.  During Hanukkah of 1998, there was the dedication of another major expansion, that added another wing of classrooms, enhanced the sanctuary and library, expanded the kitchen and added a rabbi’s study.

Today, the Temple provides worship, education, and all Jewish life-cycle events, and has a dedicated portion in Beal Cemetery for Jewish burials.