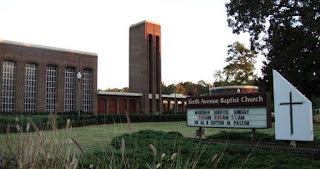 Rev. Al B. Sutton, pastor of Sixth Avenue Baptist Church in Birmingham, one of the city’s largest black churches, surprised his flock this morning by announcing that he was leaving to start a new church, which will meet at Temple Emanu-El.

Sutton attended Yom Kippur services at Emanu-El and addressed the congregation. Soon thereafter, he mentioned to Emanu-El Rabbi Jonathan Miller that he was planning to leave Sixth Avenue, which he has led since 2000, and asked about Emanu-El being the temporary home for the new Living Stones Temple. The name comes from a verse in 1 Peter in the Christian Bible, “You yourselves are being built like living stones into a spiritual temple.”

Living Stones’ first service will be next Sunday at 8 a.m. The agreement between the church and Emanu-El was announced to Emanu-El members by email today. Emanu-El President Mackie Horowitz said “with pride, we read the words from the prophet Isaiah, etched on our inside wall, ‘My house shall be a house of prayer for all people’.”

Several churches have met at Emanu-El over the years; most recently Independent Presbyterian Church, which met at Emanu-El for several months following a fire. Emanu-El also was housed at Southside Baptist Church for 14 months as the sanctuary was being renovated in 2001.

Sutton succeeded Rev. John Porter, who had led the congregation for 38 years, including during the Civil Rights era. He made the announcement at the 8:30 a.m. service, and did not lead the 11 a.m. service. According to the Birmingham News, some congregants wept at the announcement.