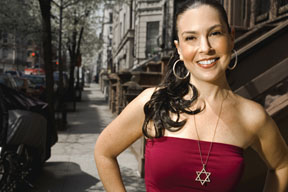 On Feb. 16, New Yorker Vanessa Hidary, also known as the “Hebrew Mamita,” will give two different performances at Ted’s Garage in Birmingham, sponsored by the Leah Marks Honor Our Children Fund of the Birmingham Jewish Foundation.

The fund’s purpose is to encourage young people to make smart life choices. Hidary’s first performance, at 5:45 p.m., will be aimed at teens, with themes of Jewish identity and being comfortable in one’s own skin. Dinner will be served to the students.

Hidary grew up on Manhattan’s culturally diverse Upper West Side. Her experiences as a Sephardic Jew with close friends from different ethnic and religious backgrounds inspired her to write “Culture Bandit,” the nationally toured solo show that chronicles her coming of age during the golden age of Hip-Hop and her dedication to fostering understanding and friendship between all people.

She has aired three times on “Russell Simmons Presents Def Poetry Jam” on HBO, and is featured in the short film, “The Tribe,” which was selected for the Sundance Film Festival, the Tribeca Film Festival, and the Jewish Motifs International Film Festival in Warsaw, Poland, where she attended as the film’s representative.

Last November, she performed at the opening reception for the Lion of Judah conference at the Jewish Federation’s General Assembly in New Orleans.

She has conducted poetry and racism workshops with B’nai B’rith Youth Organization and is the director/developer of “MONOLOGUES” — an evening of solo performances by 15 young adults exploring their Jewish identity, inspired by a 10-day trip through Israel, produced by Birthright Israel NEXT.

The evening performance is open to the public. Doors will open at 7:30 p.m. Admission is free, but a minimum donation of $20 to the Leah Marks Honor Our Children Fund is requested.