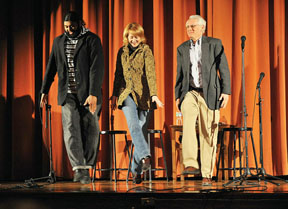 Rabbi Bob Alper returns to Alabama this month, and for one of his two shows, he’s bringing along a couple of friends.

Alper, an ordained rabbi, became a stand-up comedian and became known as “the world’s only practicing clergyman doing stand-up comedy… intentionally.” His shows are “100 percent clean” and described as “Gentile-friendly.” He will be at Birmingham’s Temple Beth-El on Feb. 26 at 7 p.m., and the University of Alabama with an interfaith program on Feb. 28.

A native of Providence, R.I., Alper is a graduate of Lehigh University, was ordained at Hebrew Union College in Cincinnati, and is the first Jewish person ever to earn a doctorate from the Princeton Theological Seminary. He has served congregations in Buffalo and Philadelphia, where he continues to conduct High Holiday services. He began his comedy career in 1986 when he entered the “Jewish Comic of the Year Contest” at the Going Bananas club in Philadelphia. Television, radio and personal appearances followed as he quickly honed his distinctive approach to stand-up. He has been seen on Good Morning America, The Today Show, Showtime, the BBC, and CNN, among many others.

On Feb. 28, Alper will appear at the University of Alabama with two fellow comedians as part of their Laugh in Peace 2011 tour. Azhar Usman and Rev. Susan Sparks appear with Alper at these events across the country. The show will be at the Ferguson Student Center at 7 p.m.

Usman is the co-founder of “Allah Made Me Funny–The Official Muslim Comedy Tour,” and he has performed in over a dozen countries on five continents. Formally trained as an attorney, Usman has been touring as a full-time comedian since 2004. He invented and appeared as the character “Vijay the VJ” on MTV. He also is part of the Make Chai Not War comedy show, uniting Hindu, Jewish and Muslim comics. Usman lives in Chicago, where his parents immigrated to from India before he was born.

Sparks is a trial lawyer who became a standup comedian, and is also an ordained Baptist minister. After 10 years as a lawyer, she traveled the world by herself for two years, then went to Union Theological Seminary in New York City. She is senior pastor of the historic Madison Avenue Baptist Church in New York City, and blogs for Psychology Today and the Huffington Post.

The Tuscaloosa appearance kicks off the University of Alabama’s Interfaith Week, and is sponsored by the Campus Ministry Association, of which Hillel and the Muslim Student Association are members, and University Programs. Tickets are free, and are being distributed through Crimson Arts.