You Are the Key: Israeli Security System makes Birmingham debut 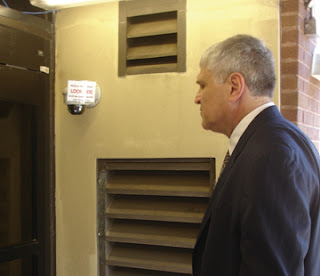 Residents of Birmingham’s Faush Metropolitan Manor by downtown Woodlawn don’t have to worry about having a key to the building with them — they are the keys to the building.

On Feb. 23, Major General Aharon Zeevi Farkash, former head of Israeli Military Intelligence, visited Birmingham for a demonstration of SafeRise, his company’s biometric security and access control system. Faush is the second low-income assisted living facility in the country to install the system.

After retiring from 40 years with the Israeli military, Farkash founded FST21 to become a leading provider of intelligent controlled access and automation solutions and services. Headquartered in Rishon Lezion, the company has its American office in Burlington, Mass.

Birmingham’s ION247 did the installation and is looking to make Birmingham “the hub of this new technology,” said ION247 President Ed Welden. His firm is preparing to install systems in Mobile, St. Petersburg and Houston, and a second Birmingham installation is in the works.

SafeRise combines three technologies — facial recognition, voice recognition and behavior pattern identification — to identify who is supposed to enter a building. Unlike conventional systems, there is nothing an authorized user needs to do except stand in front of the camera for a second or two — no need for key cards, key fobs or fingerprint recognition.

Anyone who the system does not recognize, such as a guest, is asked to respond to questions from the automated system. Instructions are placed by the speaker. After a guest states who he is visiting, the resident or employee is contacted automatically, and then has the option of whether to admit the guest.

According to Farkash, the technology is just another innovation that came from Israel’s security necessity. “Unfortunately, Israel is the laboratory for world-wide terror, for facing huge global challenges.”

One challenge comes from the wave of Palestinian terrorism that led to the erection of a security barrier and checkpoints. With up to tens of thousands of Palestinians looking to cross into Israel for work daily, how does one make sure only those who should enter Israel are allowed through with a minimum of inconvenience, and still find the one or two suspicious individuals in that crowd? It was a “huge challenge to give the Palestinians the opportunity to work in Israel but not to give them an open door for terror.”

The system allows “the appropriate people to enter very fast” while the “system works with someone suspicious.”

Avi Lupo, CEO of FST21 America, said the technology will “enable the door to know you.”

This need will grow as the world continues shifting in demographics. In a generation, 80 percent of the world’s population will live in cities, making security in large buildings even more necessary.

At first, FST21 was concentrating on high-end residential developments, business and government settings, figuring those would be most in need of security systems. At a trade show in late 2009, Bill Gorodetzer of the Michaels Organization in New Jersey saw the system and “immediately made a connection with what our company does — affordable housing, especially high-rise, with a vulnerable senior population.”

Michaels is the largest affordable housing owner and developer in the nation.

Lupo said companies that rely on human guards can see an immediate return on investment, even when the system supplements guards instead of replacing them. “It’s the highest security with the highest convenience.”

Gorodetzer said the most telling comment from a resident where the system replaced around-the-clock security guards was that “when we had guards, we didn’t feel less secure, we felt insecure.”

Jean Howell, a resident at Faush, noted the old method with key fobs “wasn’t working too well,” and every time the power went out, so did the electronic keys. She loves the new system, especially because “if you have a lot of packages, you don’t have to put your packages down to find your keys.” For those with walkers or wheelchairs, the convenience is even more apparent.

While facial recognition technology has been criticized as being easy to fool, SafeRise combines three technologies. The behavior recognition aspect can detect if someone is acting suspiciously, and can tell if an authorized user is experiencing difficulty, such as a medical emergency or being in danger.

The system was installed at Faush in January. For someone to be added to the system, they are given a one-time code by the building management, stand in front of the camera, give the code and the camera does a quick scan. There is no need for an iris scan or fingerprint detection, Lupo said. “Just be yourself, walk toward the camera.”

The system is also in place at a police station in Bal Harbor, Fla., and a Jewish school in Los Angeles.

At the Birmingham demonstration, Farkash presented a copy of “Start-Up Nation” to Rev. Erskine Faush, who is builder and chairman of Faush-Metropolitan Manor. “Start-Up Nation” is a recent bestseller about Israel’s high-tech industry. Faush said the technology “is going to be a blessing to a lot of people.”