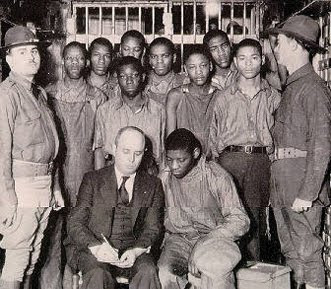 Editor’s Note: This piece is part of a series of articles, “Not Just Black and White: The Jewish Community and the Civil Rights Era.”

Eighty years ago this month, nine black youths were arrested in Scottsboro, and the subsequent miscarriage of justice would spark the modern Civil Rights movement — and color the way Jewish involvement in civil rights would be perceived for decades to come.

On March 25, the Scottsboro Boys Museum will hold an 80th anniversary event featuring Dan Carter, author of “Scottsboro: A Tragedy of the American South.”

The museum opened in the historic Joyce Chapel Methodist Church in February 2010. Almost immediately, the United Methodist Church told the Scottsboro-Jackson County Multicultural Heritage Foundation that it was going to sell the building to a private individual, and they had a couple of weeks to raise the money if they wanted to purchase it. A brief extension was granted, and the foundation was able to raise the $75,000 — half from local legislators and half from a northern foundation that gave the stipulation that there be some recognition of defense attorney Samuel Leibowitz (pictured above right with the Scottsboro Boys) there.

In its first year, the museum drew about 1200 visitors. Museum Founder Shelia Washington thinks roughly two-thirds of the visitors have been from the north, and about two-thirds have been white. 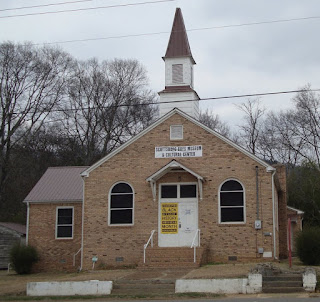 In 2004, a historical marker was placed by the courthouse in Scottsboro, causing controversy. There is no marker in Paint Rock, but one is planned for this spring.

The case began with the March 25, 1931 arrest of nine black teenagers ages 12 to 19, after a group of white boys jumped off the train and said they had been attacked. The train was stopped at nearby Paint Rock, and as the blacks were being arrested, two white girls accused them of rape. At the time, the death penalty was usually handed down for blacks convicted of raping white women.

This case was no different, as all but a 12-year-old defendant were sentenced to death. The NAACP and the American Communist Party appealed the rushed trials, which were completed less than six weeks after the arrests. The Alabama Supreme Court issued a stay of execution less than three days before the scheduled date.

The American Communist Party in New York became interested in the case, as did the NAACP, which offered the services of Clarence Darrow for the appeal. The defendants chose to let the Communist Party’s legal wing, International Labor Defense, handle the appeal. ILD attorneys found out the girls in question were prostitutes in Tennessee, with a mixed-race clientele.

In March 1932, the Alabama Supreme Court affirmed seven of the eight convictions, with Chief Justice John Anderson dissenting. The case was appealed to the U.S. Supreme Court, which ruled that due process had been denied the defendants.

The case was sent back to lower courts and a change of venue was allowed, to Decatur. At that point, the ILD retained New York attorney Samuel Leibowitz, who had never lost a murder trial, and had no connection to the Communist Party. One major thrust of his defense was to point out the lack of blacks on juries in the area, a line of argument that led to National Guard troops protecting him.

In the retrial, Leibowitz’s grilling of one of the girls led to resentment in the community that a Yankee Jew, sent by the Communists, was badgering a Southern white woman. The National Guard even had to raise the drawbridge on the nearby Tennessee River upon learning that a mob was coming to deal with Leibowitz.

Toward the end of testimony, the other girl finally showed up after visiting New York. She recanted her testimony, saying the blacks never touched either of them. But her stylish clothes were noticed, and had been paid for by the Communist Party, destroying her credibility.

Hatred of Leibowitz locally hit its heights with the prosecution’s closing arguments. The prosecutor thundered, “Is justice in the case going to be bought and sold in Alabama with Jew money from New York?”

Until the closing argument, there was some hope for an acquittal, but those at the trial remarked that using the Jew card damaged the standings of Southern Jews more than all the huge 1920s Ku Klux Klan demonstrations.

Charles Fiedelson, associate editorial writer for the Birmingham Age-Herald, noted that many in Decatur “took for granted that a Jew was a Communist or at least in secret sympathy with the reds.” In his book, Carter notes that Feidelson said the Jews of Alabama “leaned over backwards to show they were not sympathetic with the ILD.”

The defense moved for a new trial, which was granted and the guilty verdicts were set aside. New trials were ordered and a different judge — one who had not stated that he believed the defendants were not guilty — was assigned. The trials took place in late 1933, led to convictions, which were once more overturned by the U.S. Supreme Court in April 1935 because of the exclusion of blacks from juror rolls.

After the 1933 convictions, which stunned Leibowitz, he vowed to defend the Scottsboro Boys “until Hell freezes over.

“It’ll be a merry-go-round, and if some Ku Kluxer doesn’t put a bullet through my head, I’ll go right along until they let the passengers off.”

The new trials took place in 1936 and 1937, with guilty verdicts. Haywood Patterson was sentenced to 75 years, but escaped from prison in 1948. When he was caught, the governor of Michigan refused to extradite him. He was arrested for stabbing a man in a bar fight, then died a year later in prison.

Clarence Norris was sentenced to death, but the sentence was reduced to life in prison. He escaped in 1946 and went into hiding. He was found in 1976 in New York, and was pardoned by Alabama Governor George Wallace.

Andrew Wright and Charlie Weems were paroled in the 1940s. Ozie Powell was shot by an officer during an altercation during a prison transfer in 1936, pled guilty of assaulting the officer and was released in 1946.

The four others had all charges dropped in 1937.

After the first convictions, the Scottsboro Boys became a cause celebre for Northern Jews. Murray Friedman, in “What Went Wrong? The Creation and Collapse of the Black-Jewish Alliance,” said there were two reasons why — awareness of the growing threat to civil liberties of Jews in Germany at the time, and that two Jewish attorneys were key parts of the defense team.

There were frequent demonstrations in Harlem, and the Forward and Morgen Journal wrote over 100 articles on the case.

But in the South, Leibowitz became the prototypical “northern Jew working to undermine Southern values,” wrote Leonard Dimenstein in “Anti-Semitism in America.” The fact that he was sent by the Communists was even worse.

That rallying cry would affect Jewish participation and effectiveness in the Civil Rights battles even into the 1960s. Northern Jews would flock to the South, often encountering resistance from Southern Jews who had to live with the repercussions of their visits.

Integration was seen by the Klan white supremacists as a “Jewish-Communist” plot to destroy America. That perception was reinforced by the fact that as many as half of white Northern demonstrators and activists that came South to work for civil rights were Jews.

The Scottsboro case was also the first instance of Southern rabbis having to be careful where they stepped.

Rabbi Joseph Gumbiner of Mishkan Israel in Selma was appalled by the case and spoke out, infuriating his congregation and prompting an emergency board meeting. A few years later, he would move west, and returned to participate in the 1965 Selma to Montgomery march.

Rabbi Benjamin Goldstein of Temple Beth Or in Montgomery attended a 1933 rally in Birmingham for the Scottsboro Boys. Upon returning to Montgomery, he was told to stop speaking out or leave. He resigned, and then moved to New York after numerous threats, noting that anyone taking “an impartial attitude toward the conduct of the Scottsboro case is immediately branded a communist and a nigger-lover.”

Rabbi Morris Newfield of Temple Emanu-El in Birmingham, who was president of the Central Conference of American Rabbis, was asked to investigate Goldstein’s departure, and concluded that it was based more on religious disagreements. A few Beth Or members disagreed with that conclusion, and a second body was formed to probe further; Newfield chose not to participate since he did not want anyone to think the new body had a member who came in with his opinion already formed.

Newfield was a member of the Independent Scottsboro Committee, formed in 1936 to help bring justice to the case — not necessarily because everyone believed the defendants were innocent. The main goal was to remove Leibowitz from the case, since it was assumed by then that a Jew from New York, sent by the Communists, could not win an acquittal, but an Alabama lawyer might have a better shot.

Throughout the 1950s and 1960s, rabbis who were very public about civil rights did so at the risk of their jobs, if not their lives.

Update: In August 2012 there was an effort to get official pardons for the Scottsboro Boys who had not been pardoned. Governor Robert Bentley has said he has no legal authority to issue them, and the State Board of Pardons and Paroles said they are not allowed to grant posthumous pardons. Bills will be introduced into the Alabama Legislature in 2013 to give the authority in this case.