On the ground in Pleasant Grove 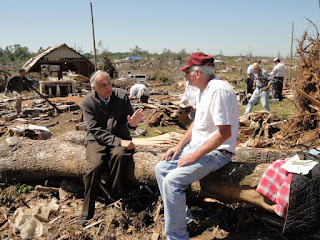 This morning, Rabbi Avi Weiss of the Hebrew Institute of Riverdale accompanied Rabbi Eytan Yammer of Birmingham’s Knesseth Israel Synagogue and several volunteers from the Birmingham Jewish community on a visit to Pleasant Grove, an area just northwest of Birmingham where one of the April 27 tornadoes cut a wide swath of destruction.

Weiss said he hadn’t seen anything like the devastation. Riding through Pleasant Grove, he asked “There were houses here? Mamash (really), houses?”

Even for someone who saw the aftermath of the Sept. 11, 2001 attack on the World Trade Center, this was unique. “This is so wide,” he said, surveying vistas as far as the eye can see where very little was left standing.

Also on the trip was Elie Lowenfeld, program director for the Jewish Disaster Response Corps, which is headquartered at New York University. He arrived on Sunday to begin coordinating his organization’s activities.

After checking in at the First Baptist Church in Pleasant Grove, which has become a nexus for area relief efforts, the caravan drove for several minutes, looking for someone who could use some help. At the church, the volunteer coordinator urged Yammer to go a distance from the church, since those closest in had likely received the bulk of volunteer assistance, while those further out had probably not seen as much assistance.

The group stopped at a lot where J.D. Smith was working to clean debris. The home belonged to his ex-wife, who took shelter in a bathtub when the tornado approached. As the house was ripped apart, the bathtub was launched beyond the trees and landed beneath debris; she survived with several cracked bones.

Smith, who lives in an area of Pratt City that was a mile from the storm’s path, said one son a few blocks over also lost his house.

The group worked through the morning to separate the debris into wood, metal, brick and a few personal items. The debris is hauled away quicker if it has been sorted by category.

Back at Knesseth Israel, the group stopped for a brief prayer, and Weiss said “I will forever be touched by you and by the people we just met.”

Yammer, who has also worked as a paramedic — including a stint at Ground Zero shortly after the Sept. 11 attacks, is continuing to lead groups to Pleasant Grove. To sign up, go to this site.