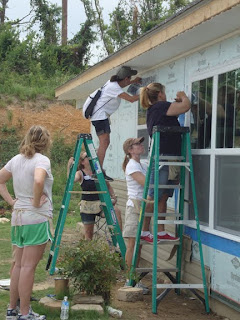 On June 29, Jewish women from across America were in the North Smithfield Manor community in Birmingham, installing windows in the Wilkerson family home with workers from Habitat for Humanity.

North Smithfield, located next to where the future Interstate 22 will link up with Interstate 65, was one of many communities leveled by the April 27 tornadoes, which killed 241 people in Alabama and destroyed thousands of buildings in 43 of the state’s 67 counties.

The women were a delegation from the Jewish Federations of North America National Women’s Philanthropy group, which spent three days in Birmingham to meet with the community and learn about the tornado devastation.

Shortly after their arrival, they had a briefing at the Levite Jewish Community Center with the Birmingham Jewish Federation, Collat Jewish Family Services and United Way.
Trish Hoover from United Way told them that the faith-based communities “did not wait for instructions” and started helping immediately after the storm hit. Now, the groups are part of a coalition to coordinate relief efforts, and FEMA is looking at Alabama’s response as a national model to replicate elsewhere.

Every Monday, a group of about 100 representatives from various groups meet to put the plan together, with an eye toward a three or four year process.

Currently, CJFS is “anxiously awaiting the opportunity to do case management” as individuals are funneled through FEMA and insurance claims, said Executive Director Lauren Perlman. The agency, which first did case management following a 1998 tornado outbreak, is already handling emergency cases that can’t wait for the usual channels.

Gail Norry, who chairs NWP, said the group was set up as a way for women to “touch and feel their philanthropy.” The group has done several projects in the New Orleans area post-Katrina, including a book drive centered around last November’s General Assembly.
“A trip like this is a huge part of why women get involved in the organizations that they give to,” said co-chair Nelle Miller. “Although we have raised funds in our individual Federations and through JFNA, we are lucky to be able to go to Birmingham, and actually use our hands to help out in some way.”

Karen Kramer of Philadelphia echoed that. “If you’re going to be the change, what is your next step? We do a lot of fundraising, but this is the hands-on Tikkun Olam.”

By coincidence, the Birmingham Jewish Federation was holding its annual meeting the night that the group arrived, so the delegates got to meet a wide range of community members.

The group toured the devastation in Pratt City, meeting with Phyllis Wyne, who set up a summer camp for children affected by the tornadoes. Kramer said Wyne saw “this was an issue and they pulled together that camp. These kids have nowhere to be, their neighborhood is gone.”

Even more remarkable, Kramer noted, is that Wyne did all this despite her home being destroyed. “She said, I still have to do something for the community.”

Standing outside the Wilkerson home, Norry said “we’re very anxious to come back, to bring more women from around the country and take on other projects.”

She added, “everybody’s been unbelievably hospitable, and have made us feel not only welcome, but like we really can make a difference, which is what we want to do.”

The group also discussed other possible projects they could undertake where women who are not able to come to Birmingham can participate.

Kramer said, “It’s easy for us to drop in and say here we are… but the Birmingham community is inspiring.”