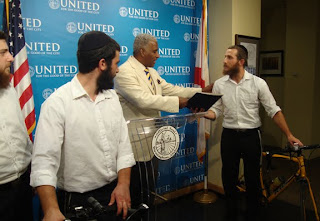 It isn’t every day you see three rabbis, fringes blowing in the breeze, bicycling the back roads of the South. But that’s the whole idea behind Bike 4 Friendship.

Sixteen days ago, Zalman Perlman, Shmuel Rothstein and Dani Saul set off from Livingston, N.J. on a 4,000-mile cross-country trip to raise awareness of Friendship Circle, a nationwide Jewish organization connecting teenage volunteers with children and teens with special needs to foster a sense of companionship and community.

Saul said as they travel, “most people see rabbis on bikes, and wonder what we’re doing.”

The trio arrived in Birmingham today to spend Shabbat with the local Chabad community. They stopped at City Hall this afternoon and received a proclamation from Mayor William Bell, who declared July 21 “Bike 4 Friendship Day.”

Bell greeted the visitors with “Shalom,” and did a passable pronunciation of “V’ahavta l’reyecha kamocha” (and you shall love your neighbor as yourself) in reading the proclamation.

After Shabbat, the group will continue its 100-to-130 mile per day pace, stopping Sunday night in Livingston, then stopping in the Jackson area, Natchez, Miss., and Leesville, La., before heading into Texas.

The idea started with Perlman having pizza with a friend in Israel when the idea came to him. “We decided we wanted to do something unique. It was over the top, and we really wanted to help an organization that needed a lot of publicity but wasn’t getting as much as they should.”

He admitted he had never been a biker, but “I decided I can’t run across America, so I’ll bike.”

Rothstein, on the other hand, grew up bicycling in Baltimore. At the age of 12 he was the youngest in Project Jewish Unity, where participants would do long bike rides.

At the kickoff on June 26, 100 special-needs children in New Jersey received specially-designed bikes, from Olivia’s Friendship Circle, a bicycle giveaway envisioned by 11-year-old Olivia Lefkovits as her Bat Mitzvah project. They started the big ride on the third of Tammuz, the yahrzeit of Rabbi Menachem Mendel Schneerson. On Tuesday, they decided to wait out the fast day of the 17th of Tammuz in Atlanta rather than ride on a day when they could not drink.

In the first three days, debris-laden roads caused 10 flat tires for the group, and Rothstein fell on the first day. Since then, it has been mostly smooth sailing, with only one flat tire.

They mostly went down U.S. 29 and came into Alabama on U.S. 78. They were struck by the beauty of the Blue Ridge Mountains in Virginia, if not the climbs. “The two-mile uphill was definitely exciting, but it would’ve been cool if itwas downhill,” Perlman said.

The three stayed last night in Oxford, using Marriott points donated by a supporter in Philadelphia.

Perlman, who grew up in Los Angeles, said all three of them have lived in big cities, so this is a big change of pace for them. “The hospitality has been unbelievable,” he said. The trip “opened my eyes completely to all the ways of life.”

Going into the trip, they were most concerned about hills, but having trained in the winter, they were unprepared for the heat — and once they hit the South, the humidity. They have changed strategy — departing around 5 a.m. and finishing the day’s route by around noon. When they hit Texas, they plan on even more night cycling.

Another aspect of the tour is to visit with 20 Friendship Circle chapters at Chabad centers across the country. There are chapters in Atlanta and Houston. “We don’t have a Friendship Circle here in Birmingham — yet”, said Rabbi Yossi Friedman of Birmingham’s Bais Ariel Chabad Center. “We have been interested in doing something for a long time, and maybe this event will be the impetus needed to get it going.”

The tour also is raising money for Friendship Circle, with donors asked to dedicate miles for $4.

The rabbis’ journey can be followed online here.