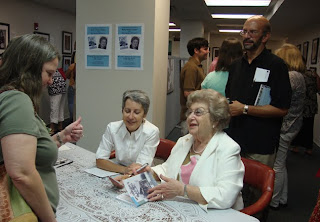 Phyllis Weinstein, chair of the Birmingham Holocaust Education Center, said the center’s office had never seen a crowd like this one.

This afternoon, Ruth Siegler signed copies of “My Father’s Blessing,” a memoir about her experiences in the Holocaust and her journey to a normal life in Alabama. Slated to begin at 3 p.m., the signing started early due to crowds that had already gathered. At times, the line for signatures was dozens deep; within 45 minutes, pre-signed books were gone and only four of the dozen cartons of books remained.

Visitors to the center also viewed the “Darkness Into Life” exhibit, a photography and art exhibit about the life experiences of Alabama’s Holocaust survivors.

Siegler and sister Ilse Nathan were in five different concentration camps and lost the rest of their immediate family in the Holocaust. Unusual for a Holocaust memoir, the book contains a large amount of documents from their life in Europe, which they had sent to relatives in the United States.

On October 16, the Temple Beth-El Sisterhood will host Siegler for a program about her book.