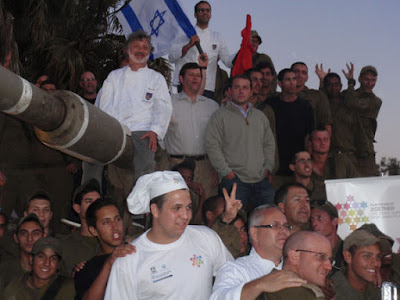 Take four chefs steeped in the decidedly non-kosher New Orleans cuisine, have them cook kosher in Israel in a series of events that seem like they came from the minds of Food Network reality-show producers, and what do you get?

For the chefs, a trip of a lifetime and a life-changing experience. For Israel, a culinary event that made a huge splash nationally for a week. And for New Orleans’ Partnership 2Gether community, Rosh Ha’Ayin, a civic event of unprecedented proportions.

Chefs John Besh of Restaurant August, Chef David Slater from Emerils, Chef Jacques Leonardi from Jacque-Imos and Chef Alon Shaya from Domenica spent a week in Israel at the end of June.

Alan Franco chaired the delegation, and Michael Weil, director of the Jewish Federation of Greater New Orleans, said “we were very lucky to get four celebrity chefs,” along with their spouses and girlfriends.

Rabbi Brad Hirschfield of the Jewish Center for Learning and Leadership also was on the trip as a scholar-in-residence.

The mission was a return trip from the visit of Israeli chefs to Birmingham and New Orleans last year. Birmingham also has an official sister-city relationship with Rosh Ha’Ayin and is celebrating the 30th anniversary of that relationship this year.

After last year’s visit, Shaya said a return trip for New Orleans chefs to Israel was discussed, and “I said count me in… this was something I’d always wanted to do.”

Shaya was born in Bat Yam, and his family moved to Philadelphia when he was four. “I never really had a chance to get to know Israel,” he said, despite going there for family visits. This was a chance to see Israel “not only as a chef but as an adult.”

For Besh, who grew up a “devout Catholic,” this was a chance to see all the places he had studied in reading scriptures. “To actually go and step foot… it’s incredible and very powerful.”

It was also a chance to see old friends he hadn’t seen in 25 years, some of whom are leading chefs in Israel.

Slater, who has been to Seder at the Franco home, said Franco brought up the idea to him and “I was all for it.”

For Leonardi, traveling to Israel really wasn’t on his to-do list, but when he was asked about the trip, he figured it would be interesting from a culinary perspective. Now, “I’d recommend visiting Israel to everyone. It’s so beautiful.”

One of the main events of the trip was a June 27 dedication ceremony for the Rosh Ha’Ayin Promenade. The chefs each had an individual station where they prepared their dishes and did demonstrations. They prepared 2,000 plates, and early on figured that about 1,000 people would show up. At the last minute, the expected crowd figure was bumped up to 2,000. 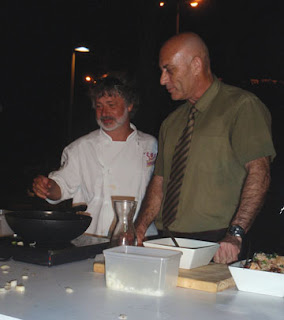 Instead, estimates of the crowd were from 7,000 to 10,000, depending on who you ask. Weil said it was the largest outdoor event ever held in Rosh Ha’Ayin, which has a population of around 40,000.

Rosh Ha’Ayin Mayor Moshe Sinai said “the visit was important and inspiring. It demonstrated the friendship between our communities and the ability of local initiatives to bring change, love and joy to our residents.”

The chefs made a range of Louisiana-inspired dishes: Slater made redfish courtboullion, Leonardi did smothered chicken, Besh made jambalaya and Shaya made quail gumbo.

Besh figured it would be a challenge to do New Orleans dishes kosher, but he wasn’t unfamiliar with the guidelines. “It’s easier to make my food when I can use all the shellfish in the world, and my bacon,” he said, but he “can make great jambalaya out of beef sausage and chicken.

“It may not be my mom’s jambalaya,” he added.

Shaya noted that the promenade dedication brought together the two communities of Rosh Ha’Ayin — the historic Yemenite community, and the relatively new community that has come in over the last 20 years as the city tripled in size. “The event… was one of the first times the two communities really came together.”

He compared it to New Orleans — “all these cultures coming together over a pot of jambalaya.”

Leonardi also felt the similarities. “In New Orleans we live for the moment because who knows when the next hurricane will be; this is what I understand from Israelis that they do because they don’t know when the next war will be, so they live for the day.”

This was the second major event for the chefs in Rosh Ha’Ayin. On June 24, they prepared a gourmet Shabbat dinner for 60, attended by the mayor and other dignitaries in the home of Eran and Michal Katzir. Slater said it was an “amazing experience.”

The chefs had a wide range of helpers. Mothers and children helped prepare the Shabbat dinner, and Hirschfield served as sous chef in many places.

Shaya said “we felt so welcomed by the community in Rosh Ha’Ayin. The second we got there, already it felt like family.”

Besh said the people of Rosh Ha’Ayin were “some of the most personable people that I have ever met” and that he “couldn’t think of a better place for a sister city.”

He saw similarities with New Orleans in an emphasis of arts and music. “They’re doing the same thing we’re trying to do here” in promoting cultural heritage.

While the chefs worked, other mission participants did volunteer work, Weil said. In Rosh Ha’Ayin, they visited the Aviv Center, where they made crafts with Ethiopian youth, planted trees in a garden and dedicated a bench.

Gilad Dolev, owner of Dolev Culinary Strategy and a Rosh Ha’Ayin resident “did a very good job getting it organized and set up for us,” Shaya said. “We were able to enjoy our time there. The days we cooked, we worked hard, but the organizers did it so we weren’t in the kitchen the entire time we were there.”

A highlight of the trip was visiting an Israeli military installation on the Golan. About a dozen residents of Rosh Ha’Ayin took off work to travel with them, Weil said. “We went up as 30 people but came back as one family.”

At the artillery base, the chefs prepared a five-course meal for 400 soldiers in the Flying Tiger Brigade, cooking with the army chefs. They all slept in army barracks and were awakened at 4 a.m. for an artillery exercise, after going to bed at 2 a.m. The chefs, who were also all in military uniform, had breakfast in the field, prepared by a Druze soldier’s mother. 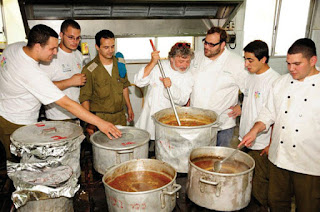 Weil noted that Besh, a veteran of Operation Desert Storm with the U.S. Marines, and Leonardi, a Coast Guard veteran, were in their elements there. “They switched from being chefs to being soldiers.”

Besh said the soldiers “are truly protecting their families. Americans have no idea what it’s all about” because the U.S. sends troops across the world, while Israeli soldiers are protecting their own back yards. Besh was among those who liberated the Kuwait airport from Iraq in 1991.

One soldier who was not able to attend the dinner was the one who planned the whole event. His wife was nine months pregnant, Weil said, and he had told her that she could have the baby anytime but that one night. Sure enough, as the delegation arrived, he greeted them and said he had to leave, she had gone into labor. They had a girl.

The chefs began preparations at 3 p.m. for the 8 p.m. dinner, which included couvillon, jambalaya, eggplant and almond cakes. Sfinge, a Moroccan doughnut, was compared to beignets. One soldier quoted in a Ha’Aretz article said the dishes “seemed special, but there were familiar flavors.”

The chefs visited the Tadmor Chef School, where they had a lecture on Israeli food and kashrut, and then ran two workshops on Creole and Cajun cuisine.

They visited the farmer’s market in Tel Aviv, prominent “cutting-edge” restaurants in Tel Aviv and Jerusalem, and two wineries.

They also visited with Shai Zelter, who Weil said is known as a “hermit figure who lives in a cave outside Jerusalem” and makes cheese in the caves. “He took us inside the cave, which he never really does.” 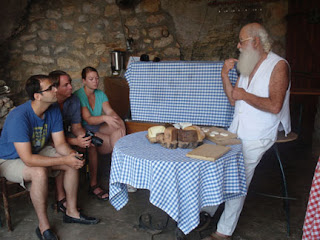 The chefs all remarked about Israel’s fresh produce, sustainable farming methods and clean flavors. Besh also was a fan of the vast Israeli breakfast.

Where is Israeli cuisine on the world stage? Recently, it was announced that an Israeli chef would be on an “Iron Chef America” episode to be taped this summer, and another would be on “Chopped.”

Shaya said there is an identity crisis in Israel when it comes to food, and a lot of people don’t think there is a distinct Israeli cuisine. “Falafel is from Morocco, Hummus from Lebanon, Kibbe from Persia,” he said. “When I think of going to Israel, I think of hummus, shwarma, lamb, pita. Whether it came from another country originally doesn’t mean anything.”

He encouraged Israeli chefs to embrace their fundamentals “and grow it.”

Besh said Israel is a “misunderstood” country that for a long time had to concentrate on food security, developing agricultural infrastructure rather than establishing a cuisine.

Now, Israel is starting to develop its own cuisine, which “is just as much a melting pot as America is,” he said, with a Turkish base, with Eastern Europe, Yemenite and African influences added on.

“The way we cook (in New Orleans) is a celebration of all of our cultures,” Slater said, and he saw the same in Israel.

The chefs and the Federation have been discussing programs for the coming year that will involve the chefs, including demonstrations and tastings for the Jewish Newcomers, Young Adult and Leadership groups, and for the Federation’s Annual Campaign event.

Shaya said he was impressed by the roasted vegetables in Israel, how they are roasted on the grill for hours. At Domenica, there’s a wood-burning pizza oven, and he has been putting eggplant inside among the ambers. “After 25 minutes, the outside is charred, but the inside is so flavorful and creamy, with the natural flavor shining through.”

Slater also plans to do a culinary homage to the experience in Israel.

But it wasn’t just food knowledge that the chefs brought back — in two cases, they brought back the word “yes.”

Slater said the proposal “was an incredible moment. She said yes, which was even more incredible.”

At one of the restaurants later in the trip, the other participants surprised the couple with a toast, then lifted them up on chairs and danced. “I’m a pretty big guy, it’s amazing they got me up,” Slater said.

The trip “elevated P2K to a higher level — we made an event that had an enormous impact,” Weil said.

Weil said the chef trips were “a wonderful way of making friends — not really influencing people, but influencing their stomachs.”

The four chefs all said they were still on a high from the trip weeks later, and were all much closer with each other — as well as with Israel.

Besh said Israel “is too important a place not to support.”

Anyone who sees four boys running around New Orleans looking like an Israeli soccer team, that’s Besh’s kids. The oldest, who is 15, is “dead-set” on going to Israel next year.

Slater said “I could have stayed in Israel for another month. It was that amazing.”

Leonardi was especially taken by “The love of life, how they are so beautiful.” He wondered, “why don’t people go there every day?”