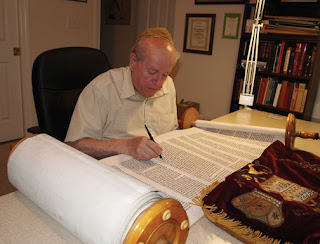 The dedication of the new Bloom Hillel Center at the University of Alabama will be completed in November with the return of Hillel’s recently-restored Torah.

The building was dedicated in April after a four-year planning and construction process. The previous Hillel was located on a prime spot across from Bryant-Denny Stadium; the new facility is part of the so-called “God Quad” area that also includes the Lutheran, Episcopal, Roman Catholic and Baptist student centers.

It is also located across the lawn from Tuscaloosa’s new Temple Emanu-El, which was also recently dedicated.

The Torah dedication will be Nov. 13 at 1 p.m., and is open to the community, with a dessert reception following. A luncheon will be held beforehand with religious leaders from around the region, including representatives of major Jewish organizations. The state’s congregational rabbis are all being invited to the dedication.

The Torah will be danced into the building under a chuppah, and there will be live klezmer music. Rabbi Bernard Honan of Huntsville, who was Hillel’s rabbi in the 1970s, will officiate, along with Rabbi Steven Jacobs. Jacobs is rabbi of Tuscaloosa’s Emanu-El, and holds the Aaron Aronov Chair of Judaic Studies at Alabama.

Honan, the only rabbinic Torah scribe in the Reform movement, has been restoring the Torah, which has been held in safekeeping at Birmingham’s N.E. Miles Jewish Day School for the last three years while Hillel was in temporary facilities. His son, Michael Honan, is co-chair of the University of Alabama Hillel Foundation.

The Torah, which was donated over 50 years ago, will be housed inside an ark that features hand-wrought iron doors created by artisan blacksmith Steve Davis of Sunheart Metalworks of Tuscaloosa.