Moses and the Cantor at Beth-El 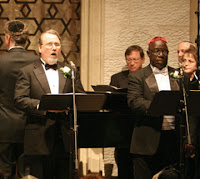 On Nov. 13, “Moses and the Cantor” will perform at Birmingham’s Temple Beth-El. Baritones Oral Moses and Cantor Daniel Gale will present a musical exploration of vocal works from the Jewish and African-American traditions, including spirituals, Yiddish songs, art songs by Black and Jewish composers, and songs from the American musical theater.

There will be a guest appearance by Temple Emanu-El Cantor Jessica Roskin, and they will be accompanied on piano by Dr. Kathryn Fouse of Samford University in Birmingham, and Judith Cole of Atlanta.

Moses and Gale met at the University of Michigan, where they shared an interest in opera. They began performing together, doing “Songs of Struggle, Songs of Faith: Celebrating the African-American and Jewish Musical Traditions” starting at Saginaw Valley State University and then in several other venues.

In 2005, the two performed “Songs of Struggle, Songs of Faith” at the historic Sixteenth Street Baptist Church, as the kickoff for a year of Holocaust education programs in Birmingham.

They were part of Beth-El’s centennial concert in January 2007, and in 2008, the two were part of the premiere of “Flame Language,” a Holocaust memorial composition by Kennesaw State Associate Professor of Music and Composer-in-Residence Laurence Sherr.

Moses started his music career in Germany in a U.S. Army chorus, then with the famed Fisk Jubilee Singers. He is professor of voice and music literature at Kennesaw State University.

The 2 p.m. concert is free and open to the community. Donations will be accepted at the door.