Curious George: From Fleeing the Nazis to a New Home in Mississippi 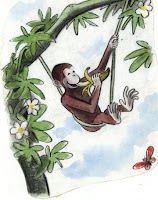 Untold millions of children have thrilled to the adventures of Curious George. Far less known is the story behind how the inquisitive monkey came to worldwide audiences, starting with the authors’ escape from the Nazi regime.

That escape, and how it framed the overall world of Curious George, is explored in “Curious George Saves the Day: The Art of Margret and H.A. Rey,” which completes its national tour at the Mississippi Museum of Art in Jackson this spring.

Nearly eighty original drawings and watercolors will be on display from March 3 to July 22. Many of the items have never been on display before.

One gallery is being transformed into a reading room for visitors of all ages, inspired by “Curious George Flies a Kite.”

In addition, the exhibition features an interactive timeline, accessed via a touch-screen computer, about the Reys’ life in France from the late 1930s through their fateful escape in the summer of 1940. Visitors will be able to view additional pages of H. A. Rey’s journal, detailing the couple’s journey to safety; images of illustrations by H. A. Rey; photographs taken by Margret Rey in France; documentary photography related to early World War II in France; and historic video. Audio interviews with the couple are also included.

In a sense, the exhibit is coming home to Mississippi. Most of the art and documentation was lent by the de Grummond Children’s Literature Collection at the University of Southern Mississippi. After the Jackson run, the materials will return to Hattiesburg.

When the de Grummond Children’s Literature Collection was founded in 1966, the Reys were among its earliest contributors. H. A. drew an illustration of George carrying his illustrations to Hattiesburg to state his intention to send the Collection some of his original work. More materials were added over the years and in 1996, upon the death of Margret, the remaining literary estate was given to the Collection.

“We are very excited about hosting this extraordinary exhibition. While on the surface the antics of a monkey entertain us, in reality they serve to teach us important life lessons about perseverance, bravery, and optimism,” said Betsy Bradley, director of the Mississippi Museum of Art. “The Reys’ personal story is one of triumph in the face of danger. Through George, they reveal their own heroics that, in the end, uplift and inspire their readers.”

Hans Augusto Reyersbach and Margarete Waldstein lived in Hamburg in the early 1920s. They met in 1925 before he left to work in Rio de Janeiro; she joined him later and they were married in 1935. They wound up in Paris working on children’s books, though they had to flee three times because of the war with Germany.

Hours before the Nazis marched into Paris in June 1940, they fled on bicycles, carrying drawings for their children’ stories, including one with a mischievous monkey named Fifi. By October they were in New York, and a month later four of their manuscripts were accepted by Houghton Mifflin.

They authored and illustrated more than 30 books, most of them for children. Seven of them featured Curious George. Today, the monkey’s antics are available in over a dozen languages, including Hebrew and Yiddish.

Exhibition highlights include original drawings and bright watercolors for “Raffy and the 9 Monkeys,” in which Curious George makes his debut as Fifi, featuring a lonely giraffe named Raffy and the nine monkeys that become his playmates; “Whiteblack the Penguin Sees the World” with Whiteblack setting out on a globe-trotting pursuit of new adventures; “Fifi: The Adventures of a Monkey,” later published as “Curious George”; and subsequent American escapades of the famous monkey hero.

While the idea of the monkey’s narrow escape from danger was introduced in the first Curious George story created by the Reys in France, the concept of “saving the day” is only used in their later books written in the safety of America.

By the time the man with the yellow hat comes to his rescue, George’s capers have already been mitigated with some poetic justice, which may be understood as emblematic of the important role the character had played both in saving the Reys’ lives when fleeing Nazi Europe and later helping them rebuild their careers in the United States.

In turn, the little monkey born in France acts out the fantasies of many immigrants: he lands an acting job in Hollywood soon upon arrival, advances research by traveling in a spaceship, and makes it to the front page of newspapers, all the while becoming thoroughly Americanized.

The exhibit is the 12th presentation in the museum’s Annie Laurie Swaim Hearin Memorial Exhibition Series. Established in 1989 to honor one of the museum’s most dedicated patrons and volunteers, the series showcases world-class exhibits that attract visitors from across the region and beyond.

On March 3, there will be opening day events including events and activities for the entire family from 10 a.m. to 2 p.m. On March 6 from 3 to 5 p.m. there will be an Evening for Educators, an opportunity for educators of all ages and all disciplines to look, learn, and connect with colleagues. Held throughout the year, this free event focuses on ways to integrate the museum into the classroom and includes a guided walk-through of the exhibit, hands-on activities, and exhibition-based curriculum.

This event is free and open to all educators.