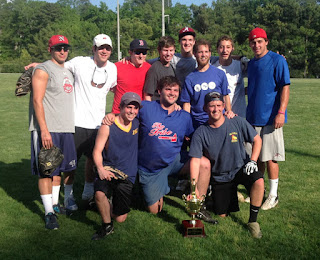 When the Bill Peetluk Memorial Softball Invitational began a decade ago, it was a contest among Birmingham’s Men’s Clubs and the Mesch AZA youth group. In recent years additional groups have been added, and this year, the championship trophy is leaving Birmingham.

The Zeta Beta Tau fraternity from the University of Alabama took the title back to Tuscaloosa on April 14, in a 22-20 comeback win over Temple Emanu-El. The tournament was held at the Levite Jewish Community Center.

In first-round games, Jason Olenick and Mark Senter each homered in Temple Emanu-El’s 8-2 win over the combined Knesseth Israel/Chabad squad. Jeff Spielberger smashed two triples driving in 5 runs, leading Temple Beth-El to a 10-9 upset win over the two-time defending champs, the Chai Flyers of You Belong In Birmingham. The young Jewish adult group of the Birmingham Jewish Federation was led by David Lorberbaum, Kevin Broday and Max Morris, who each drove in two runs.

In the semi-final games, Temple Emanu-El defeated the Manly Men of Mesch AZA, 21-2. Matthew Marcus homered for the second straight year for Mesch, a rocket shot over the right field fence onto Montclair Road. ZBT advanced to the championship game with a 13-8 win over Temple Beth-El. Ian Obici and Jake Schwartz both scored three runs for the victorious fraternity guys, while Atlanta’s Neil Wiesenfeld, a member of AZA with Bill Peetluk in Orlando during the early 1970s, had a few defensive gems in the outfield for Temple Beth-El.

Each team joined the community-wide commemoration of Yom HaShoah, Holocaust Remembrance Day, by participating in a community-wide reading of the names of children who were killed in the Holocaust.