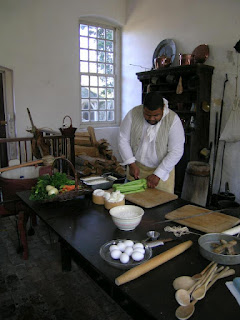 On May 23, culinary historian Michael Twitty of the Washington D.C. area will embark on a two-month journey through the South that will explore his family history through food.

In what he is calling the Southern Discomfort Tour, he plans to visit plantations where his ancestors were enslaved, meet long-lost relatives and dine with the descendants of “the people who owned my family,” some of whom he is likely related to through his white great-great-great-grandfather, Capt. Richard Henry Bellamy, who fought for the Confederacy and was captured in Vicksburg.

He also plans to say Kaddish at the graves of ancestors and learn more about the Jewish roots in his family, and Jewish influences in his culinary research.

His uncle had recorded oral histories that mentioned his family in northern Alabama having Jewish roots, and Twitty learned about it when working on a school genealogy project. He figures the Jewish person where part of his family comes from likely came from central Europe in the 19th century. “I’m still trying to discern where those links will take me,” he said.

In 2002 Twitty underwent an Orthodox conversion to Judaism. In 2004 he ignored “the current campus hype which likens Israel to apartheid era South Africa” and went on an AIPAC trip to Israel to find a “connection” to “my people, to my land.” While there, “My beloved grandmother waved from the river banks she once praised in song as chilly and wide, as I rafted down the Jordan. In that nexus, my prayer book met my grandmother’s spirituals, and staring at my reflection in those waters, my soul made sense.”

Being Jewish is a major component of his role as a culinary historian, with Judaism’s “use of the material to express the spiritual — with food being a major form of midrash.” He went from an African-American background into a Jewish background, then back again with influences from “the seder, the Haggadah, and the use of food to tell stories, relate history, and give an ennobling power to what it means to be ethnic, to have tradition, to a part of a particular people. “Each side informs the other,” he added.

“I am working on a larger project on my own cooking which incorporates that story of the intersections, similarities and contrasts between the food of the African and Jewish Diasporas,” he said.  “We’ve been in a lot of the same places, cooked similar foods and influenced each other’s cooking for centuries.”

In addition to his culinary work, he teaches at Jewish schools in the Washington area and is good friends with the sister of Rabbi Michelle Goldsmith of Birmingham’s Temple Beth-El. “They have become part of my Jewish family over the past few years,” he said.

He added that he “can’t wait to come to Birmingham” for the first time, which he likens to his “Poland” — the birthplace of his grandparents before the Great Migration to the North. “I want to get to know what life is like for Jews in Alabama,” he noted.

Through his website, The Cooking Gene, Twitty works to demonstrate how learning about “the foodways” from slave times is a “vehicle to demonstrate the importance of knowing about the individual lives of enslaved people.” It is “an act of culinary preservation and cultural pride.”

Especially during his time in Louisiana and Mississippi, he plans to trace plantations and sites of memory where his ancestors were enslaved. He also will dig up genealogical information. But a main focus of the trip is cooking and educating, doing workshops and conducting community service activities.

“We want to transform how our ancestors are remembered, but we want to better the lives of all people today,” he said, calling attention to food deserts and small-scale local food producers. To that end, he wants to “use the medium of food to promote social justice work, racial reconciliation and healing, and better access to quality food in the communities I visit.” He hopes the trip will “promote the kind of dialogue and community work that will lead to better understanding and a better future.”

He mentions the oft-used term of “racial” strife but asserts “we are only one human race.”

While he has seven community service projects lined up that involve food and promote inter-ethnic cooperation, “we are still looking for more projects — so if anyone has something in a major community we can participate in, that’s great.”

He and his traveling team plan “on doing a lot of historic cooking demonstrations so people can understand what a tough job being the cook actually was, and so they can get a sense of what these women and men of old had to endure and what they created in spite of it.” He believes “Southern food culture is one of the most beautiful and culturally refined American cuisines with an incredible geographic and historical breadth and diversity.”

He has done well over 100 presentations at plantations, historic sites and universities. In many cases, he is “horrified” by how Southern plantations and museums annihilate and obfuscate slavery. “It’s as if the buildings emerged like mushrooms or the food spontaneously appeared.  That’s unhelpful in terms of inter-ethnic relationships where people don’t really understand what slavery was about.”

As a long-time Holocaust educator, he asks “what is the cost of not knowing this story and not preventing its future manifestations?”

His itinerary will include Alabama stops in Anniston, Birmingham, Tuscaloosa, Huntsville, Montgomery and Mobile, along with Russell County, where Bellamy is buried; Oxford, Jackson, Vicksburg and Natchez in Mississippi; Donaldsonville, New Orleans, Baton Rouge and Lafayette in Louisiana. He is open to additional programs, presentations and workshops along the way. “We want to be of benefit to every community we visit.”

The tour will be photographed and filmed, “blogging about our experiences as they happen — and give elders, farmers and food producers out there a voice. Hopefully our work will culminate in a book and/or documentary, but first comes the journey.”

He isn’t embarking on a blame-the-South tour. “I have always defined myself as a Southerner,” he points out. As for white families he encounters, “I’m not looking for anything but any relevant information about our family history and an opportunity to cook with them and share details about our respective families.  I am actually pretty emotional about the idea that there are people out there of all colors that I share blood with.”

He has “no good blood for the philosophies that ripped my family apart from its homelands and exiled them and ripped their families apart in slavery,” but as a Hebrew School teacher with a curriculum on the Holocaust “I know what it means to have a measured take on the pains of the past and move forward.”

To fund the trip, he is relying on “crowdfunding” through Indiegogo, where he has giving levels based on chai and double-chai. He hopes to raise at least $8000 to fund the trip, and was about half-way there as of late April.

“A lot of social justice work is happening with this trip, and we are doing out best to help out communities across the South where folks are in need of exposure for their work, their farms, their restaurants, their community programs,” he said.