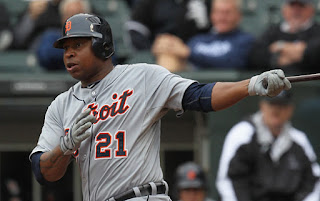 Delmon Young, who was born in Montgomery and currently plays outfield for the Detroit Tigers, was arrested in New York City on Friday morning after what is being described as a drunken anti-Semitic tirade and assault.

He was arraigned in Manhattan criminal court, charged with aggravated harassment. The charge could be upgraded to a hate crime, and could result in up to a year in jail.

Officers were called to the Hilton Hotel, where the Tigers are staying during this weekend’s series with the New York Yankees, at 2:41 a.m. According to reports, he was outside the hotel as a group of four tourists from Illinois were approached by a panhandler who was wearing a yarmulke and Star of David necklace.

As the men took out some money, Young allegedly shouted “you bunch of f—ing Jews” and attacked the group. He pushed Jason Shank of Schaumberg, Ill., into a wall and tackled him, scratching up his arm.

The four then ran into the hotel with Young following, but Young was stopped by a guard. After the police arrived, Young was taken to a hospital, reportedly to sober up, before being processed. He was released Friday evening on $5,000 bond.

The New York Post reported that Young’s lawyer, Dan Ollen, said something was said to Young that caused him to react. He added that “there are many false allegations regarding the actions of my client.”

In a statement, Young said “I sincerely regret what happened. I take this matter very seriously and assure everyone that I will do everything I can to improve myself as a person and player.”

The Tigers said “this is an allegation, and we need to allow the legal process to take its course. It would be inappropriate for us to comment further at this time.”

The Anti-Defamation League issued a statement saying “Bigoted words are unbecoming for any professional sports player and anti-Semitism certainly has no place in the game, either on or off the field… We hope that Mr. Young will take the necessary steps to apologize and ensure that his alleged anti-Semitic words do not reverberate and do lasting harm.”

Young was born in Montgomery in 1985. His father was a recruiter for the Navy, stationed at Maxwell Air Force Base.

He was the first pick for Tampa Bay in the 2003 draft, playing in his hometown with the Class-AA Biscuits in 2005. That year he was the Southern League’s Most Valuable Player.

In 2006, Young was suspended for 50 games while playing for the Durham Bulls for throwing a bat at an umpire.

Update: The Detroit Tigers announced today that Young was placed on the restricted list and will undergo an alcohol and anger management evaluation on Monday. He will be out for an undetermined length of time.