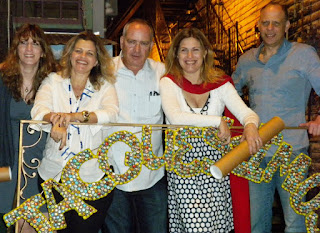 The weeks of JazzFest were a time to strengthen the bonds between New Orleans and its Partnership2Gether community in Israel, Rosh Ha’Ayin.

Mayor Moshe Sinai visited the city to further strengthen official ties, and a jazz ensemble from the Rosh Ha’Ayin Music Conservatory performed in numerous venues across the area, including the Musicians Village, the New Orleans Jewish Day School, and a jam with local musicians on the corner of Frenchmen Street.

There was also a concert at Irvin Mayfield’s Jazz Playhouse in the Royal Sonesta Hotel on April 26, and a visit to Touro Synagogue’s JazzFest Shabbat, featuring John Boutte.

The delegation also dined at Jacque-Imo’s and Domenica, whose chefs were part of the New Orleans exchange to Rosh Ha’Ayin last summer for the dedication of the Music Promenade.

Sinai’s visit included attending the World Cultural Economic Forum, held in New Orleans from May 2 to 4. The annual conference was held jointly this year with the U.S. Conference of Mayors.

During the conference, Mayor Mitch Landrieu signed memoranda of understanding with three communities, including Rosh Ha’Ayin. The memorandum calls on both communities to “examine interests, possibilities, and conditions for establishing future Sister City relations.”

Both cities agreed to identify areas of “common interest” and “identify and secure appropriate funding sources and identify local non-governmental partners in each city, such as the Jewish Federation of Greater New Orleans, that agree to facilitate implementation of concrete activities.” 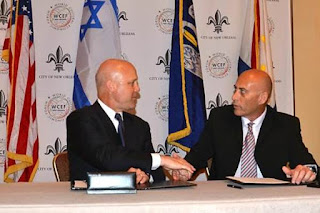 On May 3, Sinai addressed the New Orleans City Council and was recognized for the “continued partnership between Rosh Ha’Ayin and the City of New Orleans.”

The city council proclamation “formally recognizes the special relationship between the Jewish Federation of Greater New Orleans and the Israeli city of Rosh Ha’ayin; establishes the Partnership2Gether platform as a model for sister city partnerships; and encourages future collaboration and exploration of new and creative exchanges to create greater understanding and friendship among our people.”

Council President Jacquelyn Brechtel Clarkson said, “I commend Mayor Moshe Sinai for the committed work he does in promoting and nurturing the connections between the cities of Rosh Ha’Ayin and New Orleans. The relationship of our cities is based upon a unique and cherished cultural, community and intellectual partnership.”

The proclamation noted that “New Orleans and Rosh Ha’ayin are both vibrant growing cultural communities recognized as centers for music, arts, history and culture in their respective countries,” and the communities have had cultural exchanges with chefs, educators and musicians.