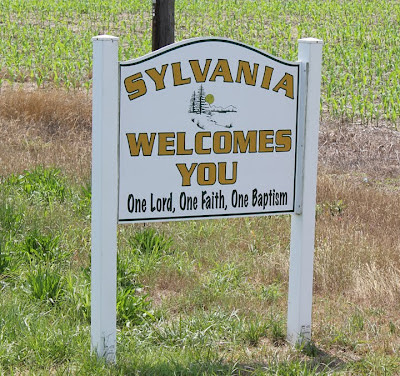 The small town of Sylvania in northeast Alabama is under fire from the Freedom From Religion Foundation because the town’s welcome signs display a verse from the Christian Bible.

In April, the foundation threatened to sue the city of 1400 over the verse. Then-mayor Mitchell Dendy had the verse removed from the signs because the town could not afford a big legal battle, but on May 8 the city council overturned the decision.

Dendy had resigned as mayor on May 1 after being fired as the chief administrator of DeKalb County jail, under allegations of sexual misconduct, improprieties and harassment, according to the Fort Payne Times-Journal.

Council members also complained that they had not been informed of the foundation’s letter or Dendy’s decision to remove the verse.

The signs state, under “Sylvania Welcomes You,” “One Lord, One Faith, One Baptism.” Before April, the sign cited “Ephesians 4:5,” though when the verse was restored, the citation was removed and the verse itself appears larger.

The Foundation for Moral Law, headed by Roy Moore, announced that it would defend the town. Moore, the current Republican nominee for Alabama Supreme Court Chief Justice, was removed from that very position a decade ago when he refused to carry out a higher court order to remove a large granite Ten Commandments monument he had placed in the Supreme Court building.

He had risen to prominence as a circuit court judge in Etowah County for refusing to remove a wooden Ten Commandments plaque from the courtroom, and to stop the practice of beginning court sessions with Christian ministers offering prayer. He said it was his moral obligation to acknowledge God in all endeavors.

This is not the first time this part of the state has been involved in church-state controversies. In 1997, U.S. District Judge Ira DeMent struck down a law allowing prayer during public events at public schools, and he barred educators in DeKalb County from leading and sponsoring Christian prayers and activities.

That suit had been filed by an assistant principal who had complained for years about coercive Christian practices in the county’s schools. As part of the ruling, county officials were required to undergo training as to permissible religious activities, and DeMent appointed a monitor to oversee compliance.

After the verse was initially removed from the city’s signs, a flock of yard signs have gone up around the city. One set has a cross with an American flag pattern, stating “We Still Believe, One Nation Under God” and citing a verse from Joshua, “As for me and my house, we will serve the Lord,” while another set, available at the local pharmacy, contains the original text of the town’s welcome signs.