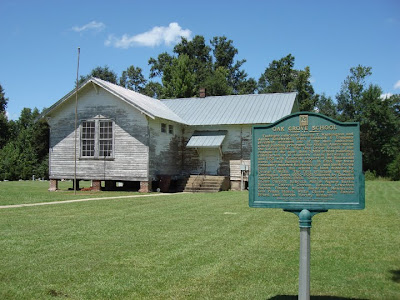 A century ago, a 50th birthday celebration for a northern Jewish philanthropist would initiate a tremendous legacy for generations of African-Americans throughout the South. This month, a large-scale effort to preserve that legacy will be undertaken with the first-ever national Rosenwald Schools Conference, to be held at Tuskegee University in Alabama from June 14 to 16.

The conference, entitled “100 Years of Pride, Progress and Preservation” is presented by the National Trust for Historic Preservation and numerous Alabama partners.

Tracy Hayes, field officer and project manager for the Rosenwald Schools Initiative, said “in this centennial year we decided we’d like to commemorate and celebrate the mission (of the schools) as well as educate people on how best they can preserve their school, their oral traditions.”

Over 5300 schools were built in 15 states in the Rosenwald Schools program. There were 405 Rosenwald Schools in Alabama, 639 in Mississippi, 442 in Louisiana and 127 in Florida. It is estimated that today no more than 15 percent of them are still standing, many in dilapidated condition. A handful have been restored and are being used for other purposes.

Julius Rosenwald was president of Sears, Roebuck and Company. He was fascinated by Booker T. Washington, who headed what would eventually become Tuskegee University. Washington advocated economic and academic advancement as the first step toward equality, rather than direct confrontation of segregation.

On his 50th birthday, Rosenwald gave gifts to many of his favorite causes, including $25,000 to Tuskegee Institute. The gift was to fund grants to African-American teacher training institutes.

Washington had a goal of providing safe buildings for black students in rural areas. As it was, the few public school buildings for African Americans were substandard, and most classes were held in churches or other private buildings. Washington envisioned schools that would be built by the local black communities, then turned over to local governments and run with a vocational curriculum as part of the public school system.

In September 1912, Washington had $2800 remaining from Rosenwald’s gift, so he asked Rosenwald’s permission to use that money as a pilot project in school building.

A grant of $300 each went to help build six schools in central Alabama — Notasulga and Brownsville in Macon County, Loachapoka and Chewacla in Lee County, and Big Zion and Madison Park in Montgomery County.

Every Rosenwald school was built with matching funds from the local community, and black communities rallied to raise the funds needed to become part of the project.

In 1917, Rosenwald organized the Julius Rosenwald Fund to administer the program. He was of the opinion that a foundation should have set goals and a timetable for disbursing all of its assets and go out of business, since one never knows what the long-term future needs in society would be.

The program had grown so large that in 1920, the administration was moved from Tuskegee to Nashville, where Samuel Smith was hired to run the program. He developed school design plans of several sizes, which were seen as “a benchmark of modern design for educational facilities” and quickly copied for white schools.

The designs incorporated large banks of windows for natural light, breeze windows for ventilation and moveable partitions between rooms so the buildings could be used for larger school and community gatherings.

The Fund had numerous conditions communities had to meet. The site had to be at least two acres, with space for school gardens and a playground. Local communities had to match the Rosenwald funds in cash and in-kind donations. Tax funds were the largest source of support, followed by local African-Americans, and a small amount of support from whites.

The fund insisted on standards for a school year, so students would have more classroom time and their teachers could earn a decent salary.

By the late 1920s, it was apparent that local school boards often would not pay for adequate materials, so Rosenwald Libraries were started, first for Rosenwald schools, then for other African American and rural white schools. Rosenwald Radios were installed in classrooms to bring news and information, and school buses also were purchased by the fund.

By 1928, one in five rural schools for African-American students in the South was a Rosenwald School. The program gave African-Americans unprecedented access to education and a stronger sense of community pride in the segregated South.

Rosenwald died in 1932, and it was announced that the program to build schools would end within a year. In the 1940s, the fund gave out its final grants and went out of business, as Rosenwald intended.

In all, Rosenwald provided more than $4.3 million in seed money to build the schools in 15 states. African-Americans themselves, many who were already struggling financially, raised over $4.7 million in the effort.

With the 1954 Brown v. Board of Education Supreme Court decision against racial segregation in schools, the Rosenwald schools started to close as desegregation was implemented through the region in the 1960s.

“For the past 10 years, the National Trust for Historic Preservation’s Rosenwald Schools Initiative has been helping local organizations save Rosenwald Schools and preserve their rich legacies,” said John Hildreth, vice president, Eastern Field Services for the National Trust. “This conference provides an opportunity for Rosenwald School alumni and preservationists to share their rich and varied stories, network with each other, and learn more through educational workshops, documentary films, tours and poster presentations to preserve this important part of our nation’s story.”

About 500 delegates are expected to attend the conference.

The conference kicks off with an opening plenary at Tuskegee University Chapel on June 14 at 3:30 p.m. There will be remarks by National Trust officials and local representatives, and inspirational stories about Rosenwald and Washington.

The opening reception will be at Moton Field, the Tuskegee Airmen National Historic Site, at 6 p.m. The field was built from 1940 to 1942 to train black pilots, with funding from the Rosenwald Fund.

On June 15 from 6 to 9 p.m. there will be a “school reunion like no other” for Rosenwald School alumni and enthusiasts. The closing plenary on June 16 at 10:30 a.m. will feature Nikki Giovanni, a world-renowned poet, writer, commentator, activist and educator. She will discuss oral traditions spawned from African-American education and how to preserve the stories for future generations.

A series of documentaries will be screened, and there will be optional walking and riding tours of the Tuskegee campus, civil rights sites in Montgomery and Selma, and tours to nearby Rosenwald schools.
Registration information is online here.