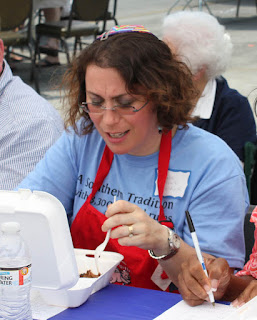 Rabbi Michelle Goldsmith judging at the Kosher Barbecue Contest in May.

Rabbi Michelle Goldsmith of Birmingham’s Temple Beth-El announced on Sunday that the coming year would be her last with the congregation.

She made the announcement at the end of the congregation’s annual meeting. Goldsmith arrived in Birmingham in the summer of 2009 after serving as associate rabbi of Temple Beth Sholom in Sarasota, Fla., where she also was president of the Sarasota-Manatee Rabbinic Association.

She graduated from the University of Judaism, now American Jewish University, before enrolling at the Jewish Theological Seminary. Upon ordination, she became associate rabbi of Beth Shalom Congregation in Jacksonville, Fla., before going to Sarasota.

The Conservative congregation with over 600 families is currently in the middle of a long-term strategic planning process, with parlor meetings and other forums anticipated later this year.

Rabbinic contracts typically have their beginning and end in mid-summer. The “searching season” generally runs from January to June.