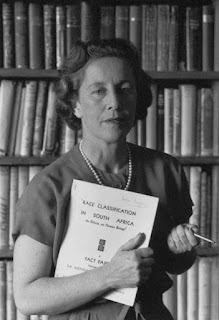 The Rosa Parks Museum in Montgomery is debuting an exhibit about a Jewish woman who fought the apartheid system in South Africa, and is hosting a panel discussion tonight as an opening event.

“Helen Suzman: Fighter for Human Rights” will be displayed through Aug. 27. Tonight’s panel, which starts at 7 p.m., includes Suzman’s nephew, Cedric Suzman, who will discuss political and cultural influences that made his aunt an activist. Troy Uniuversity History Professor Dan Puckett and a representative of the Israel Consulate will also speak.

The exhibition, developed by the Isaac and Jessie Kaplan Centre for Jewish Studies and Research at the University of Cape Town, South Africa, debuted at Georgetown University in 2009. The Montgomery exhibition is a partnership between the Rosa Parks Museum and the Jewish Federation of Central Alabama. The exhibit has also been at Dillard University in New Orleans in early 2010, and at the Birmingham Civil Rights Institute last summer.

Suzman was a member of the South African Parliament from 1953 to 1989. She was the sole opposition voice condemning apartheid during the 13-year period (1961-1974) when she was the governing body’s only member of the Progressive Party. The exhibition explores nearly four decades of Suzman’s life and vision through photographs, personal letters, quotations from speeches and news articles.

It tells, in part, of the animosity, anti-Semitism and intimidation Suzman faced throughout her career. It also highlights her enduring friendship with Nelson Mandela which began in early 1967 when she met him at the infamous Robben Island Prison where he was a political prisoner.

Suzman was nominated twice for the Nobel Peace Price in recognition of her contribution to the pursuit of justice in South Africa. She received the United Nations Award of the International League for Human Rights in 1978. In 1989, Queen Elizabeth conferred on her an Honorary Dame Commander (Civil Division) of the Order of the British Empire. Suzman died on Jan. 1, 2009, at the age of 91.

There will also be a panel discussion on “Legacy of the Civil Rights Movement: A Fragile Alliance” on June 21 at 6 p.m.; and on women’s leadership in the Alabama Legislature, July 12 at 6 p.m.