Back from Israel performances, Antigone Rising to play in Birmingham 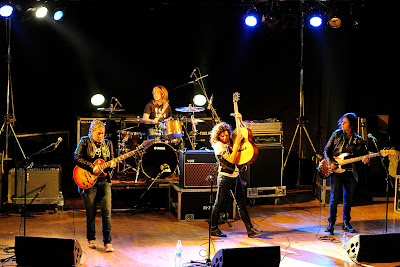 On June 14, Antigone Rising, an all-female rock band from New York, will perform at The Nick in Birmingham. While the band is known for its extensive touring, it recently had a completely different concert experience — as United States arts envoys and cultural ambassadors in Israel and the territories.

The band had a whirlwind week-long Middle East visit in late February, with appearances in Beersheva, Jerusalem, Tel Aviv, Bethlehem and Ramallah, among other stops.

Bass player and band founder Kristen Henderson said their former tour manager got an email in May 2011 from a high school classmate asking if the band would be interested in being guests of the U.S. Consulate General in Jerusalem.

Noting they are a “band of extremes,” playing 280 shows a year or not touring at all “because we’re giving birth to babies,” she figured it was “extreme” that “the one time we get an offer to play shows outside the United States, we’re invited to do so by the U.S. State Department, as Arts Envoys as part of a peace program in which we perform for both Palestinian and Israeli audiences in the Middle East.”

Kristen Henderson and sister Cathy founded the band after graduating from college. At first an acoustic quartet playing in Greenwich Village, they evolved into a rock band. They were on the 1998 Lilith Fair tour, and have toured with The Rolling Stones, Aerosmith, The Allman Brothers Band, The Dave Matthews Band, Rob Thomas, Joan Jett and The Blackhearts, Lucinda Williams and The Bangles.

Their 2005 release, “From the Ground Up” was the first CD in Starbucks’ “Hear Music Debut” series. The next year they were in national ads for designer clothing company 7 Jeans, and have appeared on many national shows.

Their most recent album is “23 Red.” They are currently on a Southern tour.

Their Israel trip, which they chronicled online, included numerous shows for students of diverse backgrounds. The first stop was in Beersheva, where they performed for Jewish and Bedouin high school students, then off to Jerusalem. Vocalist Nini Camps called that concert “surreal” because “one hour prior we were walking the halls of the Old City and laying eyes on some of the most sacred places in the world. Religious or not religious, there is just such a sense of history here that it can be overwhelming.”

They played at an international school in Tel Aviv, and did a nightclub show. They also did Drums and Disabilities workshops and performed with the Kadima Tzoran girls choir.

David Brinn of the Jerusalem Post commented, “Who would have thought that some of the finest, most energetic rock and roll shows to take place in Israel in this still young year would come courtesy of the U.S. State Department? Appearing at the brand new and beautiful Meit Massie Theater in downtown Jerusalem… they were phenomenal. The souls who did make it to the free show were treated to a standout performance, featuring three-part harmonies, great musicianship, showmanship and good cheer.”

After a few days in Israel, they went to Ni’lin, near Ramallah, for a concert and cultural workshop, followed by shows in Bethlehem and Ramallah. They had an exclusive performance at the old city of Bir Zeit for participants of the U.S. Consulate-General sponsored Ghaneeha! Season 3 and the Palestinian Youth Empowerment and Volunteerism Program. Ghaneeha is an American Idol-style youth development project designed to demonstrate the musical skills and talents of Palestinian youth. Audiences throughout the Middle East cast their votes.

Consulate General Counselor for Press and Cultural Affairs Frank Finver stated, “Antigone Rising’s visit marked an exciting launch for an event-filled month. The historical and cultural contributions of women, both Palestinian and American, are something that all of us can celebrate. Antigone Rising’s music speaks to themes that unite us all as human beings, and I hope that Palestinian audiences enjoyed hearing their messages of empowerment, equality, and hope.”

The final day included a workshop on musical improvisation — which they improvised — at a girls’ school in Jerusalem.

According to the U.S. Embassy in Tel Aviv, “These women are not only talented musicians, but also gifted authors and therapists who reach out to people who are dealing with difficult physical and social challenges. They truly understand the power of music.”

Ayelet Dekel of Midnight East said Antigone Rising “are inspiring in their music and the way they walk the walk and show it can all be done – raising children, writing music, performing and touring.”

The band has links to several videos from their Israel tour, on their website, antigonerising.com.

Doors will open for the June 14 show at 8 p.m. A Fragile Tomorrow, touring with them, will open the show at 9 p.m., and Antigone Rising is scheduled to take the stage at 10 p.m. Tickets are $8 in advance, $10 at the door. They are also playing Charlotte, Atlanta and Nashville on this tour, and in January performed at the 30A Songwriters Festival in the Florida Panhandle.