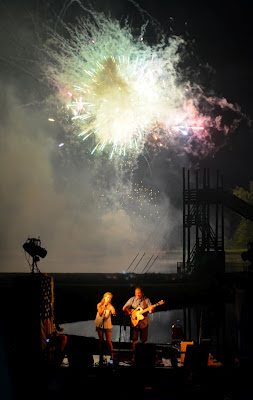 As Camp Darom’s buses departed the Henry S. Jacobs Camp in Utica late Wednesday night, Rabbi Avichai Pepper, director of Camp Darom, said the day “was the coolest thing Camp Darom has ever done, and maybe the highlight of this summer.”

The Independence Day Americafest brought together Mississippi’s two Jewish summer camps for the first time — the Reform Jacobs Camp and the Orthodox Camp Darom, for a day of celebration.

“If you were an outside observer, you would not have been able to tell who was a Jacobs camper and who was a Darom camper,” said Jacobs Camp Director, Jonathan “J.C.” Cohen.

The Darom campers arrived mid-afternoon after a three-hour trek from their Grenada home base. The 60 visiting campers were immediately whisked into an Independence Day parade with the Jacobs campers, led by singer Dan Nichols.

Nichols, who spent a week last fall touring smaller and mid-sized Jewish communities in the South, said he has never experienced anything like that day at camp. “It’s very brave to do this — long overdue — and it displays exceptional vision and leadership between both communities to design, commit and do this,” Nichols said. “It’s one thing to talk about it, and it’s another thing to walk a path; and both communities walked a path to each other.”

During the evening concert, Nichols was accompanied by Memphis native and Jacobs songleader Cara Greenstein, and staffer Charlie Cox of Mandeville on percussion. Toward the end of the concert, fireworks were shot off behind the stage into the Mississippi sky.

A sno-cone truck, with special-ordered kosher syrup, was brought in for a post-concert snack and sendoff to the Darom guests. 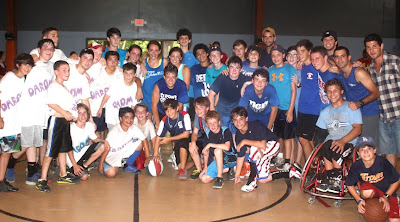 The afternoon saw a carnival and swim time at the newly-redone lakefront. There was also an inter-camp basketball game, which Jacobs won, 54-34. Cohen noted that Jacobs had been rotating in around 30 players while Darom had around 10, but noted that two of the Darom players were quite talented.

At halftime, the Darom campers held a “Party Rock” flash-mob at mid-court, while the Jacobs campers cheered them on.

The basketball game was the only time you could really tell who was from which camp, Cohen noted, and that was because they were in game uniforms. “Occasionally, you could catch a glimpse of a kippah or tzitzit. But, beyond those glimpses, they all looked the same — like kids having a great time at camp.”

Some concessions had to be made due to different levels of observance. With Orthodox restrictions on mixed swimming, separate swim times were set up. Darom brought their own food, which Jacobs Camp heated. Still, Cohen noted, the campers dined together in the dining hall as patriotic songs played.

Camp Darom is a project of Baron Hirsch Congregation in Memphis, and has been housed at several sites since it was established in 1976. Cohen said an important part of the Jewish camp experience is for Jewish kids to go from being a minority at home to being surrounded by others just like them, in large numbers. He was pleased that Jacobs Camp was able to give the smaller Darom enrollment that experience.

The novelty of an Orthodox camp and a Reform camp getting together meant the event made national and international news in the Jewish press. The day was made possible with support from the Foundation for Jewish Camp.

(With coverage by Cara Greenstein)