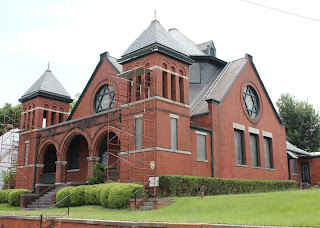 Rabbi Peter Rubinstein of the Central Synagogue in New York will be visiting Selma next month for an interactive discussion with the Jewish and general communities.

He will be at Mishkan Israel on Aug. 19 at 3:30 p.m., speaking in the back social hall. While the sanctuary of the 113-year-old historic building is not air conditioned, the social hall is, though seating is more limited.

Rubinstein’s topics will include religion in America, clergy reactions and actions after the Sept. 11, 2001 terror attacks, among others. In addition to being senior rabbi at the 2,000-family Central Synagogue, Rubinstein is a founder and chair of the Rabbinic Council of the World Union of Progressive Judaism, and co-chair of the Partnership of Faith in New York City.

A member of the Newsweek list, “America’s 50 Most Influential Rabbis” since it began, Rubinstein was ranked third on last year’s list.

Rabbi Eliot Stevens and his wife, from Temple Beth Or in Montgomery, will be in attendance. Ronnie Leet said he anticipates the majority of those at the program will be “our Christian community friends, including local clergy.”